“The Allingham Casebook” by Margery Allingham 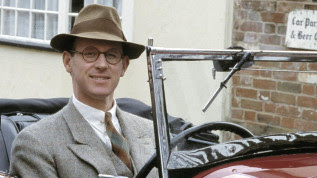 Margery Allingham (1904-1966) was one of the stars of the Golden Age of Mystery (roughly 1920s to the 1940s). She wrote 20 novels and short story collections featuring the detective she is best known for – the mild-mannered, bespectacled Albert Campion. Campion, assisted by his servant (a former convict) Magersfontein Lugg, solved crimes all over England and the continent.

In 1947, Allingham published The Casebook of Mr. Campion, a collection of short stories that has just been republished under the title of The Allingham Casebook. While Campion appears in most of them, he doesn’t necessarily play a major role in all – in one or two, he serves simply as the listener, asking an occasional question as a police official tells a story. 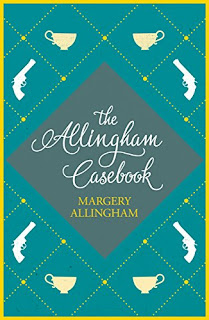 With or without Campion, the stories are delight. Allingham was a mystery writer, but she was also a writer. She writes with wit, elegance, intelligence, and charm – the very characteristics possessed by Campion. The stories are of varying length – short, long and somewhere in between. But they are all thoroughly enjoyable.

In “Tall Story,” a policeman’s height becomes the key to solving a robbery and murder. “In Three is a Lucky Number,” a husband is preparing to commit his third murder – of this third wife. In “The Villa Marie Celeste,” a young couple disappear, leaving behind their clothes, purse, belongings, and two cups of tea still warm and sitting on the breakfast table. A woman decides to help a friend and restaurant owner being almost abused by the man who’s lent her money in “The Psychologist.” And a woman looks, rather smugly, as if she will succeed in the theft of a valuable fur coat in “Little Miss Know-All.”

In “One Morning They’ll Hang Him, “ a wealthy widow is murdered, and her nephew looks like the obvious killer. A crime unfolds under the disguise of a homeless tramp in “The Lieabout.” In “Face Value,” a woman looks like she was murdered by her husband, who has a solid alibi. A serial killer is murdering women with red or auburn hair in “Evidence in Camera,” and a newspaper photographer stumbles over key evidence in his camera. In “Joke Over,” the owner of a highly successful business disappears, leaving behind all of his clothes – and his teeth. In “The Lying-in-State,” a young Middle Eastern emir without an emirate dies in a London hotel, and lies in state in a vault for valuables – some of which disappear.

Albert recognizes a criminal in a Monte Carlo casino in “The Pro and the Con,” and after  recognizing several more eventually finds himself tracking down criminals in Suffolk back in England. A policeman stumbles into a crime in “Is There a Doctor in the House?” And there are several more.

The stories are entertaining, witty, and often downright fun. Allingham was having some fun with her detective and with various police officers and officials, and the fun comes directly through the writing. The Allingham Casebook is a wonderful example of her skill in the short story form.

Top photograph: Albert Campion has been played by a number of actors in film and television adaptations over the years, including actor Peter Davison in the late 1980s.
Posted by Glynn at 5:00 AM