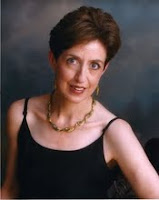 I think of Maureen Doallas as the Renaissance lady.

I met Maureen like many are met on the web – via blogs, comments and web sites. She operates a business called Transformational Threads, which licenses images of original fine art for rendering into embroidery “paintings,” also known as thread or needle paintings. She officially retired in 2007 from a job as writer and editor, but you wouldn’t know it from the sheer energy she exhibits when it comes to the arts and poetry.

She’s into all things art. She loves art, and you can see and experience her passion by reading her posts at her blog, Writing Without Paper. She’s introduced me and a lot of others to artists all over the United States. She keeps tracks of what’s going on with exhibitions, gallery openings, theatre, dance performances, concerts and movies, mostly in but not limited to the Washington, D.C., area, and she shares them on her blog in what she calls “All-Art Fridays.”

How she finds all the art-related videos on YouTube is beyond me, but when she posts one, it’s always worth watching.

And then there’s her poetry. Maureen has been writing poetry for a long time, has published some, and regularly posts her poems on her blog. She’s also a faithful contributor to our poetry jams on Twitter, which we publish at TweetSpeak Poetry. She writes beautiful words and lines – raising the bar for the rest of us. Take a look at the one she wrote for the One-Word-At-A-Time Blog Carnival on grief, or her three-part Christmas poem. Moving, simple, elegant.

She also does occasional interviews of people. And speaking from experience, she’s the most intelligent interviewer I’ve ever run across (and I’ve been interviewed by 2,000+ people in the course of my career). Likely reflecting her background as a researcher and writer, she spends an enormous amount of time researching her interview subjects, and then developing insightful, meaningful questions. I was blown away.

Maureen’s happily married (except, apparently, when it comes to fighting for space on bookshelves) and the mother of a son. She has four sisters and two brothers, and family is important to her – that comes through in all of her writings.

So read Maureen’s blog. Follow her on Twitter. She may have officially retired, but as she says on her blog site, “I’m not done yet, as you can see.” And you’ll be glad for it, too.

(Over at the High Calling Blogs, we’re celebrating the 12 days of Christmas by highlighting a blog or web site of someone besides ourselves during this season of Advent and Christmas.) (Which is what we should also be doing the other 353 days of the year.)
Posted by Glynn at 5:37 AM

When I signed on this morning and my picture showed up in the list of blogs I follow, my heart skipped. I wasn't expecting your lovely tribute!

I am so honored, by your words and especially by your friendship.

Yes, she DOES raise the bar during the Tweet parties. But more often I experience it as if she is part of an ebb and flow ... her poems become ours become hers. Though hers are still unique and marvelous, even so.

Glynn,
You're really good at this.
Hangin' with you is like going to a party and you're introducing me to all the celebs.

As for Maureen, I just recently started following, most likely met her through you. And she is a refreshing fountain of The Creators creativity.

You give so graciously of your words and tribute.

I have been the subject of one of this talented writer's (Maureen) poems. I do not claim to have poetry knowledge ("What? You call this poetry? It doesn't even rhyme!") and my "poems" all do the "moon, spoon, june thing. But I write top 40 pop lyrics and music (more music than lyrics).

Having said that, I do love reading her writings for it expands my knowledge and my horizons. I still have to look up words she uses (to much my personal chagrin), but that is how we evolve as people. Though, we have only been together in the "on-line" environment, she continues to touch people in the community in which her and I both are a part of (My Cancer on NPR.org...a community we did not elect to be in http://www.npr.org/templates/community/group.php?slGroupKey=e5c7d9a6-9f83-4b2b-a9c3-20bbd50a6714 )

This write up is long overdue and I am pleased that she is getting the recognition that she truly deserves! Below is the link to the poem she wrote about me!

Renaissance lady, yes. Her words just pull me in.

A lovely tribute to one of my newest blogging friends. Thanks for this!