The Ninth Day of Christmas: A Book

So I veer off a bit from what we’ve been doing at High Calling Blogs to celebrate Christmas – celebrating 12 days of community by pointing to favorite writers, bloggers, tweeters – “others” besides ourselves.

For this ninth day, I want to talk about a book. And not just any book, but one for which I can’t really give a dispassionate review. Several of us were “there at the creation” of one part of this book – we actually saw it unfold online. We were there when the first news of the book-to-come was eked out in barely contained excitement via Twitter and email. (To be truthful, there was no “barely contained excitement” about it – it was more like squeals of euphoria, and we joined in.)

I had the privilege to read a partially completed manuscript (Word) version of the book. The author asked, hesitantly, what parts I liked best. I said it was easier to say what parts I didn’t like – because they weren’t any. And then to see the first reports of “it’s arrived on my doorstep,” followed by “it’s up on Amazon,” well, that was excitement of the first order. 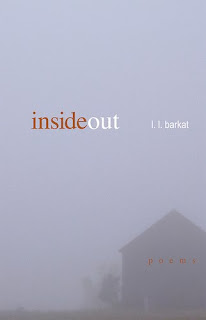 The book is InsideOut: Poems. The author is the friend I’ve never met but talked on the phone with once, L.L. Barkat. The book's web site is here.

I first met L.L. through her memoir Stone Crossings: Finding Grace in Hard and Hidden Places, published in 2008 by IVP. I’ve told the story here about how I read it straight through one night, actually one morning in the wee hours, while I was in the hospital for broken ribs and a partially collapsed lung. And I told the story again here as well, with a little more information about what happened when I read it. Books can have big impacts, and some books can have profound impacts, and Stone Crossings had a profound impact on me.

And now the poems.

The one several of us saw being created was “In Your Dream,” because it happened during one of Twitter poetry jams (plug here for TweetSpeak Poetry, our online journal for the poems created on Twitter). Here’s one of the poem’s stanzas:

I was the story
in the burning book,
leading you beyond
frost and fields
lapped by time
towards a clearing.

The poems of InsideOut are about life and death, about family and brokenness, about color and lushness, about children and art and love. They’re arranged in seasons bit they transcend that arrangement. Just when you think you understand one, your eye catches a word or phrase you missed the first two times and the meaning changes again.

I’ve read the volume twice in its bound form, three times if you count the manuscript stage. I’ve gone back to read portions again. And I will do that again, and then give it another full reading. It’s that good.

InsideOut is published by the International Arts Movement, an organization that does some pretty cool stuff.

(Over at the High Calling Blogs, we’re celebrating the 12 days of Christmas by highlighting a blog or web site of someone besides ourselves during this season of Advent and Christmas.) (Which is what we should also be doing the other 353 days of the year.)
Posted by Glynn at 7:29 AM

A wonderful tribute to L.L., and a most deserving one.

I, too, love InsideOut, and have read it and re-read it and it sits close by. There's a magic worked in these poems, and what they accomplish in so few lines leaves one awed. I have to stop now, or I be giving a review to rival yours.

I'm going to be really honest and say that I often don't "get" poetry. I feel like I just don't get the imagery and what it's supposed to mean. But after reading Laura, Maureen, you and others, I gotta say I'm warming up to it. I suppose it's like any art form, the response can be different for me than the next person, and poetry doesn't have to be "fancy".