The Giving of a Name 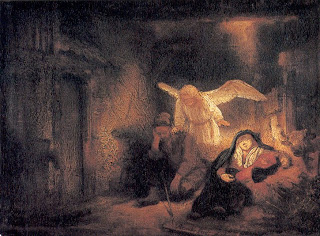 In the gospel of St. Matthew (1:18-23), Joseph, shocked and likely reeling from the news of Mary’s pregnancy, and confronted with the evidence that she had obviously been unfaithful, determines to divorce her, but quietly. It says a lot about the man and his regard for Mary. He didn’t rant and rave and react with outrage. He didn’t make a scene. Instead, he determined upon a quiet course.

Then he has the dream, and the angel tells him what really happened.

Rereading this passage, I’m struck by what I’ve always missed about it. I’ve focused on the result of the dream – Joseph listens, accepts Mary and takes her as his wife. How many times have I read this, and yet I missed something, something I think is important.

And it’s about names. In the dream, the angel does a lot of naming.

The angel calls Joseph by name, and calls him the “son of David,” indicating his heritage, yes, but also an indication of one of the names of Jesus. In other words, the angel was identifying Joseph with the child Mary was carrying, even if that would only become obvious later.

The angel names Mary, and tells Joseph not be afraid of taking her home as his wife.

The angel names the father of the child – God, working through the Holy Spirit.

Then the angel tells Joseph that he, Joseph, will give the child the name Jesus, “because he will save his people from their sins.” Jesus, as my Study Bible points out, is the Greek form of Joshua, which means “the Lord saves.”

Finally, in verse 23, Matthew writes that all of this happened to fulfill what the Lord said through the prophet Isaiah, that the virgin would be with child and give birth to a son, and they will call him “Immanuel, which means, ‘God with us.’” More naming.

But the naming that struck me was that the angel tells Joseph that he will name the child Jesus. This wouldn’t have been news to Mary; the angel had told her at the beginning that she was to name the child Jesus. But the angel didn’t explain why to Mary -- according to the gospel of St. Luke, the angel only said what the child would be. But Joseph was told why the name would be Jesus – because he would save the people from their sins. The angel spelled it out for Joseph.

It was the practice at the time that a son’s name was given at circumcision when the child was eight days old, with the father likely announcing the name. But here the angel is telling Joseph what the name is, telling him that he is to give the name, and essentially telling Joseph that he’s responsible for both Mary and the child – that Joseph would be this child’s earthly father, that just as Mary had been chosen to give birth to this child, Joseph had been chosen to be his father.

And what did Joseph do? He took Mary as his wife, he had no union with her until she gave birth, and he named the child Jesus.

He listened. He did what he was told to do by the angel. He honored Mary and the child. He honored God.

He named the child, like any father did at the time. Like Mary, Joseph accepted the responsibility he’d been given. His obedience was just as striking as Mary’s. And it’s both implicit and explicit in this idea of a name.

A humble heart Joseph must have had to receive a name to which every knee shall bow for his first born son. Thank you for this deeper look into Joseph's heart. May your Christmas be blessed.

Wonderful post, Glynn. I so enjoy reading your insights into the Word.

May your New Year blessed with His joy.

Joseph is my hero, for many reasons. One of the saints I'll be looking up in Heaven.

What I love about the title "Son of David" is that except for the first generation of King David's sons, it was used in Scripture of only Jesus—and here, of Joseph.

Merry Christmas, Glynn. Thanks for all the light you bring with your words.

no debate about what this child was going to be named.