A Pleasantly and Randomly Disturbed Thursday

My online friend Duane Scott has started a feature on his blog called Pleasantly Disturbed Thursdays, in which he posts a bunch of random thoughts. Then Helen over at Random Musings joined him this week, and I thought, oh, what the heck, why not?

Given the insufferable summer heat caused, no doubt, by global warming, I had planned to do an early morning bike ride today. The weather forecast was partly cloudy. At 5:30 a.m., I went outside and looked at what the Weather Service calls partly cloudy – huge black thunderclouds threatening a deluge at any moment. Not promising for a bike ride. So I didn’t. Naturally, there was no rain, and it turned sunny 40 minutes later – too late to do the ride. Sigh.

My almost-14-year-old dog gets his second flu vaccine shot tonight. He can barely get up and down stairs (I carry him up) and I’m worried about the canine flu, which hasn’t hit Missouri yet but is in all the surrounding states.

I’m almost finished reading Broken by Travis Thrasher. A big chunk of the novel is set in my hometown of New Orleans post-Katrina and I can tell that Thrasher has done his research. And I’m getting too old to read books that keep you on the edge of your seat.

This morning, I read the St. Louis Post-Dispatch and a great column by sportswriter Bernie Miklasz on the USA-Algeria World Cup game yesterday; the editorial and op-ed pages of the Wall Street Journal, noting a column I wanted to circulate at work; an article in the Churchill Memorial Library’s magazine about the great-grandson of Winston Churchill visiting the place (it’s in Fulton, Missouri, home of Churchill’s “Iron Curtain” speech and it’s a gem of a library and museum – first class); a book review in Modern Reformation Magazine about Liberty University; and a poem posted at Pete Marshall’s web site about Jack the Ripper. I’m nothing if not eclectic.

People who comment on my blog posts write better comments than I write blog posts. I keep learning that over and over again.

We have two weddings to attend this weekend. We’ve already attended three and have another one in July. And several baby showers (well, my wife has attended the baby showers). This seems to be the year for weddings and babies.

Have I told you about my grandson Cameron? Lately? 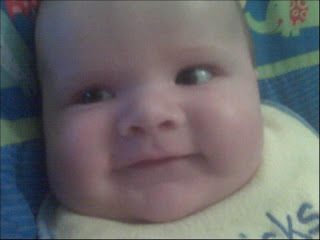 Glynn,
Kind of like the disturbed Thursday theme...the grandson too:)

And I feel for you on the bike ride. That happens to me ALL the time. Then I say, "You know what? It didn't rain last time so I'm just going to go."

I end up half dead from hypothermia. Or canker sores. I'm not sure what the appropriate sickness is.

And you know what? I feel the same way about comments. The people that leave them always hold such wisdom, and I end up banging my head against my desk saying, "And why couldn't I have been born smarter?"

Sorry for the ramble.

I'm all about Thursdays. :)

You read a lot. I think I read quite a bit, but I often read, then re-read things. This slows me down. I received an email requesting that I read and review a book from someone I've never heard of. Of course I said yes, because I'm a sucker. Now I feel like I have to read it. It's about end times. Sigh...

This hardly qualifes as "comments better than the post", but thanks for letting me ramble on.

Cameron is an absolute doll. Please tell me you're spending plenty of time with him?

And I always figured you read before tweeting. You just seem to carry that kind of credibility ...

Imagining you on the pleasantly part is easy enough ... not so much the disturbed part ...

Agreeing with Anne about Cameron ...

My daddy graduated from Westminster College in 1936 -- he was not there ten years later for the Iron Curtain speech, but he bragged about his college, the fact that Churchill spoke there, and told stories nostalgically about his hometown of Fulton, Mo. I felt like I knew the people he knew.

He lived in Callaway County until after WW2 when he moved to the big city of St. Louis, where he met my mother who interned there at a local hospital.

All of my siblings were born in St. Louis except me -- I was born in Jacksonville,Fla, where he had been transferred by Western Auto. When they transferred him to Atlanta, in 1954, my dad thought he was settled. Two years later, they wanted to move them again, and he looked for other employment. My dad wanted to put down roots so that he could raise his family knowing their town. :)

My dad subscribed to his hometown newspaper for as long as I remember -- just to read the obituaries.

Over the years, he, not only, took our family to his hometown -- but made the trip many times after he retired. I know that he attended many of his college reunions. He loved that town -- that school.

Thanks for doing a little random today.

That baby makes me smile, and so does your pride in him. :)

I follow your same RT rules. Read, then RT. Always. Trouble is I'm so far behind on the reading part.

Your grandson is delicious. I want one.

I thought I read alot...whew!
Your grandson is a keeper, what a blessing!

I miss my dog.

Nothing disturbed about Cameron. He's a sweetheart.

Even your random thoughts are thought-full.

I've got more than 1000 posts in my reader and I'm not writing much lately, but I treated myself to your blog just now and glad I did. Your grandson looks like you. I hope he gets enough kisses on those cheeks.

I thoroughly enjoyed this visit with you Glynn. It was like sitting down for a little chat.
I feel worried about your dog. The dog of my childhood lived to be little older than your do is now, and I wish I could have extended his life by about 50 years. He was one of a kind. I hope your dog will do well.
That baby is just adorable.

Amen to your re-tweeting rules!!

Isn't it a challenge to dive into randomness?

I read before tweeting, too. Once or twice I got ahead of myself, and tweeted then read. It didn't turn out badly, though. Thanks for mentioning me and linking to Random Musings. Sorry you didn't get your bicycle ride.

Who knew? Did you take valium before you posted this. Smokin' nutmeg? I'm smilin'. I'm glad you read before you RT. Nice to know. It matters. :)

I'm pretty sure that all of those baby showers are directly related to the crazy winter that we had...just about nine months ago.