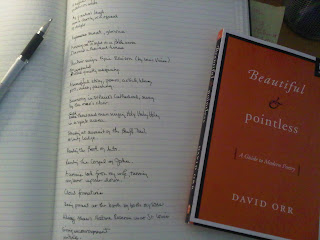 Over at TweetSpeak Poetry today, I’ve posted a review of Beautiful & pointless: A Guide to Modern Poetry by David Orr, poetry columnist for the New York Times Book Review. The book was just published last week, and it is rather a good one – smart, witty and with just the right amount of snarkiness (but not too much), as I say in the review.

It’s the kind of book that sets you to thinking about poetry and writing, how you came to both and where you think both might take you.

I came to poetry through a kind of back door, or perhaps a side entrance. Yes, I read poetry in middle school and high school English classes. Yes, I read it in college when I took two semesters of English literature – two semesters and two volumes of the Norton Anthology of English Literature (I still have them on my bookshelf). What I remember most was the professor I had for my second semester, who loved to give tests consisting of obscure lines by Romantic poets, and we had to identify the poet and the poem. (My default: whenever I was in doubt, I answered Wordsworth. The professor’s Ph.D. thesis was on Wordsworth, and my default was right about 85 percent of the time.)

Seven years out of college, I found myself in a corporate speechwriting group. I had taken one rhetoric class in college, and had had Latin in high school, which had exposed me to Cicero, Seneca and other Roman orators. But I was pretty raw when it came to formal rhetoric, and understanding what I was doing with speeches. The friend I mentioned in my post on Friday set me on a course toward the modern poets, and I discovered Wallace Stevens.

I’m not sure what impressed me the most – his poetry or the fact he had been a vice president at an insurance company, despite being offered a plum academic position at an Ivy League college.

But it was when I started reading Stevens that I started getting serious about language and writing. From Stevens, Eliot and Dylan Thomas, I moved to other great poets. I went back to the Romantics (although the bad taste about those college tests still lingers). Then Dante, Tennyson, the British poets of World War I. Beowulf. Dickinson. Chaucer. Edgar Lee Masters. Whitman. Longfellow. Many others. I read to see how words were used, how meaning could develop through meter and flow, and how to pace language. And the speeches I wrote began to change.

The first time the change had become obvious was in 1985, for a speech by a marketing executive at a customer dinner to introduce a new product. I wrote it, but I wasn’t at the dinner to hear it. Others who did hear it wondered at what had happened – the executive had walked into the dinner as just another business guy but left it “almost a poet,” I heard.

Three years later, I was assigned to an executive who knew (1) he wanted to transcend the company and the industry to lead it in a direction it had to go and (2) how to use a speechwriter effectively. We made a small slice of industrial history, but history nonetheless. This was followed by nine of the most productive years of speechwriting I ever had, a hiatus of two years, and then six productive years.

There is no writing I do that makes me feel more vulnerable than poetry. It’s not that I think people will think them bad; it’s that I’m afraid people will see straight through them to my soul, or perhaps my heart. Other forms of writing I do – while just as “creative” – are usually less transparent. I can write a story that may or may not be autobiographical. I can give an account of something in a journalistic or reportorial style, but the personal is usually hidden.

But I can’t write a poem without feeling naked and vulnerable.

A review of David Orr's Beautiful & pointless is posted at TweetSpeak Poetry.
Posted by Glynn at 5:00 AM

Interesting. I came to poetry along a similar track, I suppose. Particularly interesting--and a little surprising--that it was Wallace Stevens that grabbed you.

And for that very reason, is why I struggle with writing poetry. It's stripped down and leaves me feeling vulnerable. It has been over 30 days since I've written any.

I have been blessed by your vunerability. Thanks for taking the risks.

You relate an essential about the best poetry: It's never only about its subject.

I've noticed changes in your poetry since the first time I came to it via RAP. You're always a pleasure to read.

I used to love writing poetry. You are inspiring me to create another blog for my art, poems and creative stuff. Thanks!