Just a few photos about what’s been happening with the grandsons.

Cameron spent a good portion of the day Tuesday with his grandmother, including a lunch of some of his favorite foods – cherry tomatoes (he knows where they’re kept), cheese and strawberries. However, he was not impressed with the official food of St. Louis -- toasted ravioli. 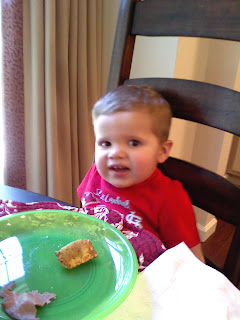 Here’s Caden (almost three weeks old) doing one of his two favorite activities – sleeping. (The other is eating.) 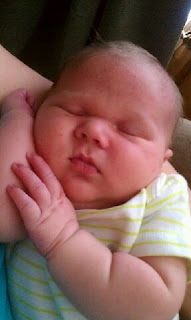 And Cameron joined Dad in helping to feed his brother. 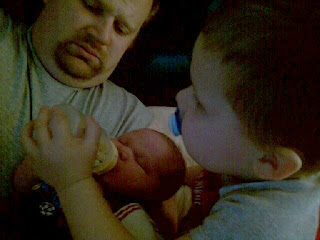 Uncle Andrew is in town for a visit this weekend, so we hope to get some photos of him and his nephews.

Top photo by Janet Young; bottom two photos by Stephanie Young. Use with Cameron’s and Caden’s permission.
Posted by Glynn at 5:54 AM

Always enjoy your grandchildren updates! Blessings for the weekend.

Have a good one.
We will be pouring wine for two days.

I would not want to trespass on Cameron and Caden's permission.