An Interview with Michael Kent-Hughes

We caught up with Michael Kent-Hughes, the lead character in Dancing Priest and its sequel, the recently published A Light Shining. We asked him about what happened between the books, how he feels about the turn the second novel takes, and where he goes from here.

Michael, thanks for taking time to talk with us today. When we left you at the end of Dancing Priest, it looked like a wedding was in the future. 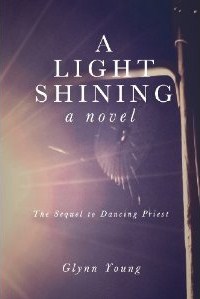 It was. And there was a wedding, and it was one wild bash. It falls in between the two novels, so you only get a few references. Either Glynn Young isn’t big on details or something was cut. I suspect the latter.

You and Sarah have joined your names as a married couple. You were Michael Kent the last time we talked.

We weren’t making any kind of statement; it was simply something we decided to do. Sarah also though it sounded rather British, a bit of English and Welsh hyphenation.

Her father, who had walked away from the family in Dancing Priest, is clearly back, and a reconciliation has happened. I've heard you had something to do with that.

Strictly rumor. (Grins) It’s part of the wedding story; I might have to talk with the author to see if he’ll do a novella or something to bridge the two books. I did have a private conversation with Seth Hughes, however, and some things changed as a result. For both of us.

A Light Shining is a very different kind of book than Dancing Priest. A romance and a kind of family story has moved to what is clearly suspense. The reader knows from the very first page that something bad is threatening.

That’s exactly what happens. I can tell you that Sarah was none too pleased, too. We were thinking that we were young marrieds, beginning a new life together, thinking about family, raising Jim and then Jason, me considering my career and future in the church, and then it all blows up. Sarah literally goes through more of the story than I do, given the amount of time I’m out of action, so to speak. But she’s magnificent, isn't she? I watched all the news reports afterward, and, well, I better not give too much of the story away.

A Light Shining has less emphasis on cycling than Dancing Priest. Were you happy with that? 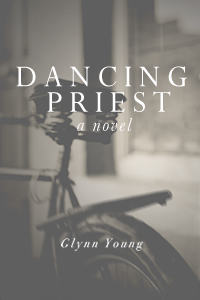 Cycling is still a part of the story, of course, but it’s become less central. That’s to be expected. I wasn’t planning to pursue a cycling career, and I get enough in the story to keep me satisfied.

This new character in the story, the one who comes in at the very beginning of the book – what did you think about him?

So what’s next? Will there be another book?

The truthful answer is we don’t know. Much depends on how this current one does. I also have it on good authority that the author is working on another and different kind of book altogether, something to do with poetry, along with a novella and a completely different novel.

Sarah and I have been talking about it. We’re going to have our hands full with family and, well, those other things we now have to deal with, as you know. I’m not sure if we’ll actually have the time or not.

But it might be fun. But don’t tell Sarah I said that.
Posted by Glynn at 5:00 AM

I finished A Light Shining last night. What a ride!!!

I haven't had any time to write this week, but as soon as I can get back to it, I'll be giving you a 5 star review. I thoroughly enjoyed both books and can't wait to see what you bring to the table next.

I just received notice that my copy is in the mail. Christmas may have to wait while I read it!

Can't wait to read it, Glynn! It's on my Christmas wish list. :)
Blessings!

Sir Michael, even though we didn't get a seat at the wedding, there was enough love from the first novel to carry us over into the second, but if sir Glynn wants to fill in that gap, I reckon we'd be happy to read it too!

And about sir Glynn... after the first page of "A Light Shining" I was ready to send him to the corner. I mean really, tossing me onto a suspense track like that! Wowzer, what a ride.

May God bless you and yours as you start your new adventures. We'll be waiting (not very patiently though) for the next telling.

Oh great, the first commenter said "what a ride" too. Anyway, it was; sorry for the repetition.