Charleston – A Poem by Lynn Morrissey 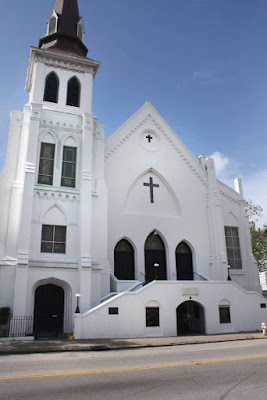 Lynn Morrissey is a writer and poet, who has written for The High Calling and numerous web sites, including Jennifer Dukes-Lee’s. She is the author of Love Letters to God: Deeper Intimacy Through Written Prayer; Seasons of a Woman’s Heart: A Daybook of Stories and Inspiration; and Treasures of a Woman’s Heart. We happen to belong to the same church in St. Louis, and I’ve actually served with her husband on the church Board of Deacons.

Lynn has written a fine poem about the murders of nine people at the church in Charleston, and I’m privileged to share it here.

Nine innocents assembled,
as children in a Sunday-School circle,
smiling,
sharing,
daring to entwine the stranger in their midst
in love’s caring embrace.
Opening their good hearts to him,
opening their Good Books,
their fingers traced ancient emblems on a page,
onion-skinned words,
pregnant with power,
that birthed life and love, freedom and hope,
while he unearthed a pistol with nine bitter bullets,
threatening to unleash Pharoah’s racist vitriol
of centuries past.

Would that the stranger had unsheathed the Sword, two-edged,
and turned it on himself,
pledging to let it do its piercing surgery,
dividing his withered soul and spirit, tethered joints and marrow,
cutting to the quick his narrow thoughts and intentions,
his rancid racial dissension,
slicing out the bigotry hidden in his own subterranean, Satanic heart.
Would that he had subjugated his repugnant faux-supremacy under
the Supreme Judge.

Would that he had begged Him
and them
for mercy for even contemplating what he was about
to do.

(He could have stopped.
Racists can always stop.
They must.
stop.)

Instead, he raged on, firing close-range shots like cannons,
abandoning all humanity,
decency,
morality.

He left them there,
nine innocents below the mahogany-lined,
stained-glass sanctuary,
blood-stains on his hands,
slave-chains on his heart,
chains sure to drag him down and drown his soul.

But for nine faithful saints,
the waters parted.

They walked through to safety.

They walked through to higher,
holier ground.

Photograph: Emanuel African-Methodist-Episcopal Church in Charleston, via Episcopal Café, which also has a brief history of the church.
Posted by Glynn at 5:00 AM

Glynn, thank you for your kind words and gracious generosity in publishing "Charleston." I'm indebted. I don't have a blog, and wanted a way to share my grief publicly while this is timely. Remembering will always be timely; racism never is. It's my prayer that we will learn life-changing, soul-stirring lessons and never tolerate the racism in our midst, in ourselves. Thank you for helping me find a way to honor these nine precious saints who gave the full measure of their devotion to Christ.
Thanks again so much for your kindness in sharing.
Lynn

Heart grabbing poem and lesson, Lynn. A beautiful tribute to the ones that will be waiting to greet us in heaven. May God help us. That's my prayer. Thanks again for sharing your heart even in grief.

Floyd, thank you for these gracious words, and especially coming from such a passionate writer and lover of Christ, they mean a lot. I know He will answer your prayer, our prayer. God bless you for your compassion.
Lynn

Oh, Lynn, what a poignant, powerful piece. the last lines about the saints walking through parted waters just got me.

Jody, thank you so much for these generous words. I"m glad that the piece touched you. Somehow I had the vision of Pharoah as a prototype for all racists, for all those who try to enslave or do. I am hardly saying that any of us, especially these nine and their grieving families, would have chosen this "escape route" to God. But we know that they are now safe with Christ. Thank you for commenting.