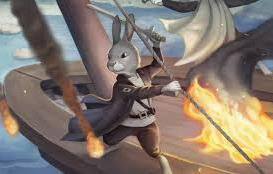 Amazon made a mistake.

I was one of the beneficiaries of the mistake.

And what a rollicking good story this is. Yes, it’s a children’s story, but it stirs the blood and makes you want to take sword in had to fight alongside the characters in the story.

The Black Star of Kingston is a kind of prequel to Smith’s first children’s book, The Green Ember, with the story taking place about 100 years before (I reviewed The Green Ember here in February). A prequel, yes, but it provides context for the story of the green ember and the critical role it plays it the history of the rabbits.

Yes, rabbits, rabbits with names like Fleck the miner, and Galt, Gavin, King Whitson and Queen Lillie, Prince Lander, Massie and so many more. Some years prior, they had fled the destruction of their home and many members of their families, founding the town of Seddleton on the shores of Lake Ayman.

The settlement needs fuel, however, and to cut down too many trees is to make the rabbits vulnerable. They look across the lake at the brooding, dark mountains beyond – which Fleck believes are a likely source of coal. Eventually, the king outfits an expedition. The rabbits do find coal, and something else, something evil, something that will seek to destroy them, their families and their town.

It’s a heroic story, demonstrating what happens when an ordinary individual (Like Fleck the miner) follows his convictions and rises to what can only be called heroism.

Like The Green Ember, this story is illustrated by Zach Franzen, who gets the rabbits exactly right. A sequel to The Green Ember is scheduled for publication in 2016.

The Black Star of Kingston is not only a children’s book; it is a book to be read by adults to children – for the benefit of both.

Top photograph: Cover illustration of The Black Star of Kingston by Zach Franzen.
Posted by Glynn at 5:00 AM

Oh, I'm so glad you reviewed this, it sounds like something my kids will love. Hopefully our library has The Green Ember in stock! Thanks, Glynn.

I read The Green Ember on your recommendation and really enjoyed it. I'll look for this one!

Ah! The wonders of placing pre-orders, aye? I started my son's copy of the Green Ember just last night. He's been anxious for the prequel for months.

I read The Green Ember on my Kindle, and I liked it but didn't love it. I think the electronic format makes me lose some appreciation for certain books. Anyway, I'm going to read this one in print form and see how that changes my perceptions.