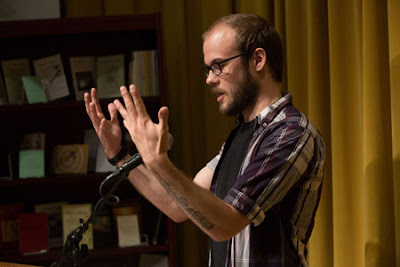 Perhaps it comes from having a long, rather unexpected career as a speechwriter, but I tend ot listen carefully to spoken language, both in real time and what various media report as to what people have said. You might imagine that the presidential election cycle means my brain is on overdrive, as if someone is pouring political phraseology through large funnels into both ears. 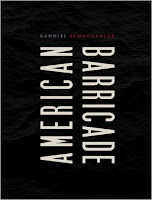 My solution is to not watch and not listen, or at least not listen much. Language and how it’s used is important to people who write speeches as well as other things, and language does not usually fare well during political seasons. It even spills over into sports. Do you know that, according to Wired Magazine, that if you go anywhere near the Super Bowl you will be “surveilled” hard? And I think that, without having watched a single political debate all the way through, I can tell you the “message points” of all the candidates.

My preoccupation with language came to mind while reading Danniel Schoonebeek’s first poetry collection, American Barricade. It’s an unusual collection: the poems are unusual; the structure is unusual; and the close blending of the personal and social is unusual.

Photograph: Danniel Schoonebeek at a poetry reading.
Posted by Glynn at 5:00 AM