Riccardo Bruni’s “The Lion and the Rose” 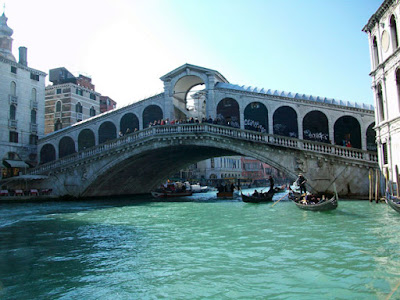 It is Venice, 1502. Matthias Munster, a monk in trouble with his order over his teaching is asked to return to Venice to help the Doge solve a horrific series of crimes: the bodies of three men have been found floating in the Grand Canal. They endured horrible torture before they were killed. Only one can be identified – a printer of books.

Matthias wants to return to his native Germany, to teach in a new school being established in Wittenberg. The winds of reform are blowing through his soul, and one of the reasons is the Venetian woman he’s in love with. He agrees to investigate the murders for the Doge, only to find himself increasingly sucked into power politics involving the Venetian merchant nobility, the church, and Pope Alexander VI, formerly known as Rodrigo Borgia, who is maneuvering to bring Venice under his control. 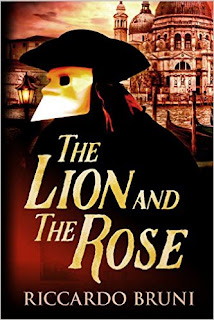 At the heart of Riccardo Bruni’s The Lion and the Rose (translated by Aaron Maines) is the true story the Donation of Constantine, by which the Emperor Constantine supposedly transferred authoring over Rome and the Western Roman Empire to the pope. It was by this document that the popes claimed political authority over much of Western Europe. A 15th century monk, Lorenzo Valla, undertook textual analysis of the document and proved that it was a forgery. He assembled his proof in a manuscript.

The Lion and the Rose is a well researched tale, with a pace filled with increasing tension. Side stories involving the woman Matthias loves, the nephew of one of the murdered printers who’s in love with a young novitiate nun, and a young Jewish man who hates the nephew are skillfully woven into the larger story.

Venice itself becomes almost a character in the story as the characters move across its narrow streets, canals, alleyways, palaces, inns, and warehouses. Gondolas, familiar today as boat rides for tourists, were used in the early 16th century as as transportation, movement of cargo like trade imports, and, in this story, scenes for clandestine meetings and the movement of terrified victims.

Bruni is a journalist and writer for webzines, magazines, press agencies, and the author of five novels. This story is the first to be translated into English (and also German).

The Lion and the Rose is an intriguing story, combining both a fictional story with actual events. (And in reality, Valla’s manuscript does eventually get published – in 1517, the same year Martin Luther nails his 95 theses to the door of the cathedral at Wittenberg.)

Photograph of the Ponte Di Rialto in Venice by Eliska Nikodemova via Public Domain Pictures. Used with permission.
Posted by Glynn at 5:00 AM