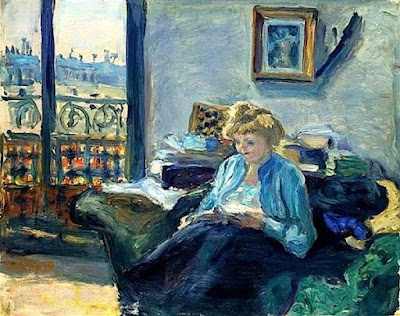 There was a time when those of us who grew up in Louisiana thought we had much to apologize for in terms of the quality of our public education. We generally battled Mississippi for the bottom ranking. Twenty years after I left public schools in Louisiana, I learned that maybe a state that had dragged its feet on implementing all the latest fads in education might have inadvertently done me a huge favor. E.D. Hirsch Jr., writing in Democracy, might agree.

Spitalfields Life, a blog that focuses on the history, life, and culture of Spitalfields in east London, started a series this week on painters like Albert Turpin associated with the area. A book, East End Vernacular, will be published in the fall; in the meantime, you can visit the blog and see the painters and some of their works to be included.

A.G. Harmon at Image Journal finds a Starbucks that use turns books backwards on shelves for decoration. Wesley Smith at First Things describes the three tipping points that pitched American society toward the culture of death (strong words, indeed). There was a moment that changed Eric Liddell’s (Chariots of Fire) life – he was asked to speak. And The Scotsman has an article on an abandoned Scottish island, with photographs.

Columba and My Calling – Malcolm Guite at The Imaginative Conservative.

Would You Leave Your Church over Politics? – Samuel James in Inklingations.

When God is silent – Troy Cady at T(r)oy Marbles.

The Moment that Changed Eric Liddell’s Life – Jordan Standridge at The Cripplegate.

In Defense of Educational Administrators – Carl Trueman at First Things.

A Sense of Belonging – E.D. Hirsch Jr. at Democracy.

A Book Without a Spine – A.G. Harmon at Image Journal.

The Halls – Jason Ramsey at Altarwork.

The Eerie Photographs of the Abandoned Island of Stroma – Alison Campsie at The Scotsman.

More Freedom Than We Want: The Literature of the American West – M.E. Bradford at The Imaginative Conservative.

The Savanna and the Ferns – Tim Good.

Not Confident in Your Writing? Write Anyway – Zak Schmoll at Entering the Public Square.

Get Lost with the World’s Master Maze Maker