“An Ancient Strife” by Michael Phillips 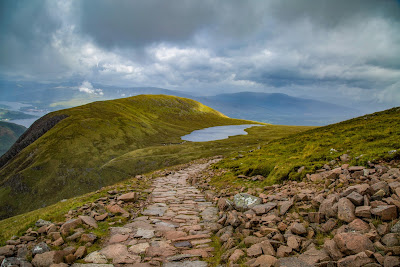 From the theft and recovery of the Stone of Scone to the prospect of independence for Scotland, author Michael Phillips continues his account of the fictional history of Scotland and the contemporary story of Andrew Trentham, a member of Parliament for Cumbria in northern England on whose shoulders will fall the decision for independence.

This is the heart of Phillips’ An Ancient Strife, in which he blends a contemporary story (and a little romance) with critical periods of Scottish history. While the historical accounts are based on fact and real events, Phillips tells them as fictional stories, doing an excellent job of humanizing what happened, the people involved, and the effects on Scotland and its people. 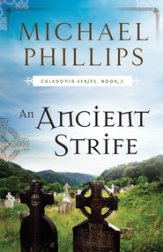 Trentham is exploring Scottish history for two reasons. First, he’s discovered that he has Gordon ancestors, so that he’s part Scot and not the full-blooded Englishman he thought he was. And second, he’s trying to understand Scotland, its people, and its history, because of the critical role he will play in the British Parliament’s vote on Scottish independence.

The first volume of this two-part “Caledonia” series, Legend of the Celtic Stone, started the two-volume account (and was reviewed last week). I was expecting something of a romance between Trentham and the American journalist working for BBC but something changed between the two volumes. The journalist turned out to be married but somewhat estranged from her husband, and Trentham manages to fall in love with a rather fiery if diminutive Scot veterinarian. I suspect that the author needed to keep the romance within the Scot family.

Both books are self-contained and can be read separately or alone, but they are obviously the same story, with the same major characters and general narrative. In An Ancient Strife, Phillips tells stories in depth about the Viking invasion, William Wallace and Robert the Bruce, and the Battle of Bannockburn among others. And one of his major themes is that Scotland has been betrayed by some of its own people as much as it has by anyone else – brother battling brother, clan battling clan, region battling region. That’s the “ancient strife” of the title.

Phillips is the author of 23 works of non-fiction. He’s edited 27 works of the Scottish writer George MacDonald, whose books had such an impact on C.S. Lewis. He’s edited five works of Harold Bell Wright and Ralph Connor. He’s also co-authored 13 novels with his wife Judith Pella, and written more than 40 original novels on his own.

If you want to learn more about Scotland’s history and read a contemporary story at the same time, then An Ancient Strife will fit the bill nicely.

My review of Legend of the Celtic Stone by Michael Phillips.

My review of The Inheritance by Michael Phillips.

My review of The Cottage by Michael Phillips.

My review of The Legacy by Michael Phillips.

Top photograph of Ben Nevis in Scotland by George Hodan via Public Domain Pictures. Used with permission.
Posted by Glynn at 5:00 AM