A Strangely Contemporary Verse Play: “Murder in the Cathedral” by T.S. Eliot 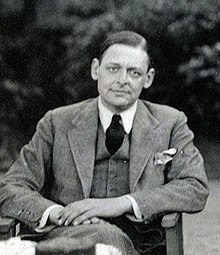 In 1934, T.S. Eliot worked with the produced E. Martin Browne to produce a verse play called The Rock. If the idea of a verse play or verse drama sounds strange, it’s how plays have been written for most of human history. The famous tragedies of ancient Greece are verse plays, as are the plays of William Shakespeare. Eliot and Browne wrote produced the play, and it was successful enough that they were asked to write one for the Canterbury Festival in 1935.

Eliot chose the murder of Archbishop Thomas Becket by agents of Henry II in 1170 as the play’s subject. He relied heavily on the account of the murder by Edward Grim, a clerk from Cambridge who was at Canterbury Cathedral on the night of December 29 when the murder occurred. Grim’s account of Becket’s death is a short one, included in his biography of St. Thomas published some 10 years after the event. But Grim was there, and it was an eyewitness account.

Photograph: T.S. Eliot in 1934, shortly before writingMurder in the Cathedral.
Posted by Glynn at 5:00 AM