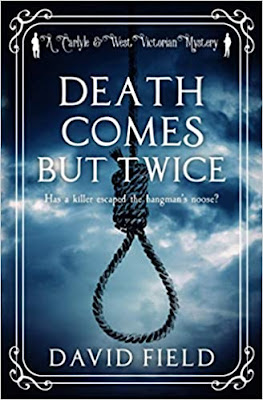 It's London, 1902. Dr. James Carlyle of the London Hospital in Whitechapel has discovered something very odd. He’s examining the body of a dead man and discovers his fingerprints match those of a criminal – a man hung some time before. How can a man die twice?

Carlyle calls upon Matthew West, a Wesleyan minister serving in a mission who’s worked with Carlyle on a previous case. West, as it turns out, was the minister who accompanied the criminal to his hanging. But he didn’t see anything unusual; in fact, he didn’t see anything at all, as he always shuts his eyes when he attends an execution.

But West goes to Newgate Prison to look at the visitor ledgers, and he discover that a woman had visited the condemned man four times before his hanging. He also notes who else attended the execution. And then he, Carlyle, and Carlyle’s very modern and outspoken daughter Adelaide discover that everyone involved in the execution are dying one by one. And Matthew West may be next. Com;licating Matthew’s life is the appearance of an older women who seems to be doing her best to seduce the minister.

Matthew is in love with Adelaide, but without a parish of his own and a stable income, he has no means to provide for a wife. For her part, Adelaide seems to go out of her way to keep the minister at arm’s length, even as he helps her with an election campaign. That is, until he’s threatened first with seduction and then bodily harm.

Death Comes But Twice by David Field is the second of four books in the Carlyle & West Victorian Mystery Series. The first is Interviewing the Dead, the third is Confronting the Invisible, and the fourth is Death Among the Nightingales. It’s a historical mystery that has a fascinating premise supported by rich historical detail and a growing romance. That detail includes the then nascent science of fingerprints, which were just coming into use by police organizations but had yet to be tested in court.

Field also written six historical novels set in Tudor England and eight novels in the Esther and Jack Enright Mystery Series. A native of Nottingham, England, he practiced and taught criminal law for his professional career. He now lives in Australia.

Interviewing the Dead by David Field.