"Interviewing the Dead" by David Field 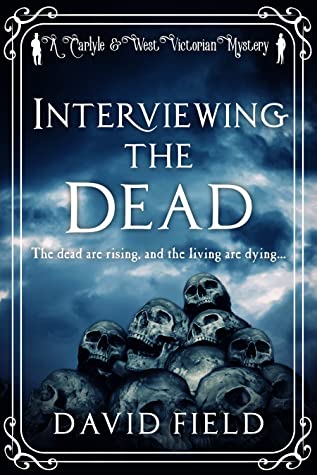 It’s late Victorian London. A medium is putting on a public performance, and the place is packed. After successfully answering seemingly unknowable questions from members of the audience, she had a vision. The under-construction underground station at St. Aldgate’s is disturbing a cemetery, and the dead are coming back for revenge. People are frightened and stampede from the auditorium.

Days pass, and people start dying for inexplicable reasons, claiming to see the dead rise and coming after them.

Matthew West is a young Methodist minister working at a mission for the poor, who seem to like the young clergyman more than his superiors. His family, who live in Clerkenwell in London’s East End, include his parents, a brother, and a sister. One day at the mission, he meets James Carlyle, a surgeon who works in the London Hospital in Whitechapel but lives is a much more fashionable part of London. He’s the nephew of philosopher Thomas Carlyle, and he has a daughter who believes women can do whatever men do in the professions and is, in fact, working for her father at the hospital.

West and Carlyle are increasingly drawn into the mystery of the St. Aldgate’s murders, which seem to be happening randomly. West actually spots the pattern first, using some of the same analytical reasoning espoused by Carlyle. West and Carlyle’s daughter Adelaide seem to generate only conflict whenever they’re around each other – a harbinger, perhaps, of a possible romance to come. And then West finds himself about to become the next murder victim.

Interviewing the Dead by David Field is the first of three books in the Carlyle & West Victorian Mystery Series, the second being Death Comes But Twice, and the third Confronting the Invisible. It’s well research and finely plotted, with numerous references to real people and events that add color and authenticity to the story.

Interviewing the Dead builds on a conflict between faith and reason (West and Carlyle), with an added dash of the political and social with Adelaide. Fields swirls all this together to create a highly satisfying historical mystery story.