“Miz Scarlet and the Holiday Houseguests” by Sara Barton 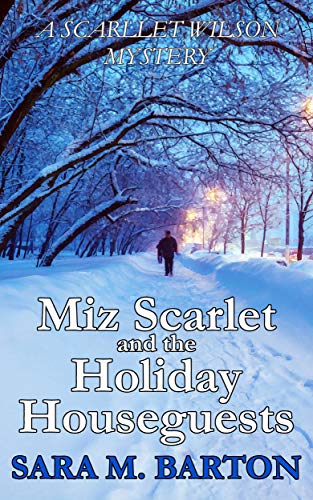 Christmas is coming, and Scarlet Wilson, known as Miz Scarlet to family and friends, is getting her Connecticut lodge ready. Her good friend Larry (short for Laurentia) has a double problem on her hands – her father and mother are coming for the holiday from different part sof the country, and she has her hands full with a recent murder.

Scarlet offers to have Larry’s father stay at the lodge. As the murder case deepens, and as a stalker seems to be following Larry around, Scarlet had her friend’s 14-year-old daughter stay at the lodge as well. And then Larry herself. Except Larry goes missing.

Miz Scarlet and the Holiday Houseguests is the third in the Scarlet Wilson Mystery Series by Sara Barton. It’s filled with family squabbles, romance, a touch of humor, a thirst for revenge, slightly more than a touch of romance, and, of course, a cozy mystery.

Miz Scarlet and the Holiday Houseguests is a fast-paced, easy-reading story and a bit of holiday escapism, with an edge-of-your-seat ending.