"Force of Evil" by Simon Michael 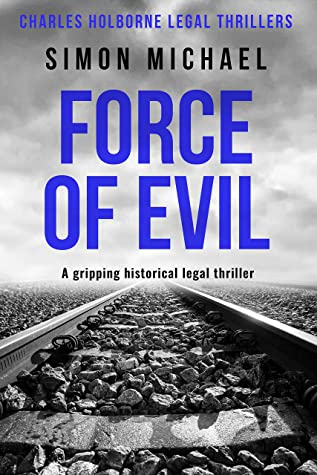 London barrister Charles Holborne, formerly known as the Jewish East End boxer Charles Horowitz, meets his good friend Detective Sergeant Sean Sloane at a pub for a drink. Charles and Sloane have a lot in common; both have strong stubborn streaks, and both have a certain prejudice against corrupt politicians and police officers. It’s the mid-1960s. Despite his courtroom success, Charles is an outsider in his profession, because of his profession and the stain of being too friendly with the wrong kind of crowd. Sloane, too, is an outsider, an Irish cop working for the London Met who finally got his transfer out of the corrupt Vice Division.

Sloane may have transferred out, but both he and Charles are about to get sucked into a case that involves stolen goods from the Royal Air Force, two murders, the gangs running London’s underworld, and police corruption that makes the Vice Division look clean.  As they leave the pub, they see someone checking nearby rail cars – someone who shouldn’t be. Sloane gets severely beaten up; the villain is allowed to go free by the apprehending officer. The detective sergeant recovers at a local hospital, and he finds himself becoming interested in his attending physician, Dr. Irenna Alexandrova, who fled South Africa after her parents were jailed by the apartheid regime.

Despite being told to stop his investigation into the railyard incident, Sloane continues, while developing a relationship with the doctor. Soon, she’s framed and arrested by police officers attempting to pressure Sloane. If she’s convicted, she’ll be deported to South Africa, where she probably faces death.  Charles takes on her legal case. The attorney is also juggling his blown-up relationship with his former girlfriend and working with his brother to figure out a solution to their mother’s failing memory.

Force of Evil is the sixth Charles Holborne legal thriller by British author Simon Michael, and it’s every bit as good as its outstanding predecessors. Michael draws upon his own legal background to tell his stories, and it’s fascinating to watch the twists and turns each story takes.

Michael studied law at Kings College, London University and was called to the Bar in 1978. He worked primarily in the field of criminal law until the late 1990s, when he focused his practice on clinical negligence. He began writing in the 1980s and resumed it when he retired from legal practice.

Force of Evil builds quickly, with tension mounting as the story moves toward the courtroom drama of a case brought against an innocent woman by corrupt police officers. It’s a top-notch story by one of the best writers in the genre today.

My review of The Waxwork Corpse by Simon Michael.