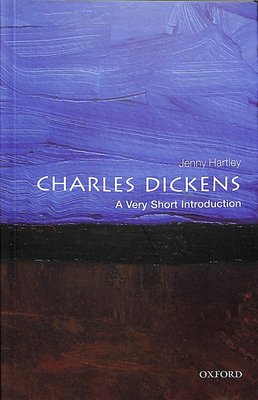 Oxford University Press has been publishing a considerable number of “very short introductions,” numbering now in the hundreds, covering authors, movements, science, technology, history, and other subjects. Last year, OUP published one for C.S. Lewis, written by James Como. The slender volumes are about 100 pages, and the ones for authors include a biographical overview as well as a discussion of major works.

And who was I to resist one for Charles Dickens?

Charles Dickens: A Very Short Introduction by literary scholar Jenny Hartley was originally published in 2016, without the “very short” in its title. Last year, it was republished including the “very short,” and packaged like the other OUP introductions. It’s concise, insightful, and covers the highlights of the author’s life and career.

Hartley discusses Dickens’s life through the prism of his works. Through Oliver Twist, we’re introduced to his early professional life and his meteoric rise in public acclaim. Sketches by Boz and other works help explain the public and private Dickens. Several works serve as the platform to explain his mastery of character and plot (and not everyone agrees on his mastery of plot). Bleak House, Dombey and Son, and other novels are used to discuss the author’s relationship with London. Hard Times serves as the platform for his radical politics and public crusades for social change. And A Christmas Carol becomes the window through which we see the man’s enormous impact on literature and culture.

Charles Dickens: A Very Short Introduction is not only brief; it’s also an excellent study of the author and his works. Hartley takes “very short” seriously and still manages to provide a broad overview with resorting to broad generalizations. It’s an excellent “very short” volume.