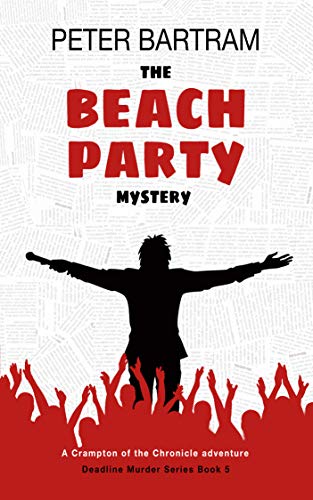 It’s the mid-1960s. Crime reporter Colon Crampton of the Brighton Chronicle has a reputation for upending the local police and his journalism competitors. What’s more, he clearly enjoys that reputation, and he isn’t above a little skullduggery to keep competitors from getting a story first.

A man has been found bludgeoned to death in his Brighton flat. From what the police can tell, the victim was running several scam activities, bilking people out of their savings. Potential suspects abound, but the most likely perpetrator is Crampton’s own landlady, Mrs. Figgis. In fact, she finds herself arrested for the murder.

His connection to the suspect gets Crampton splashed across the pages of the Chronicle’s competitors’ newspapers, offending the paper’s owner enough to have the reporter yanked off the crime beat. But crime news sticks to Crampton like flypaper, and he quietly continues looking into what’s going on, with a lead to a boat moored just outside Britain’s three-mile territory, one that broadcasts rock music and is shortly to be sponsoring a big beach party featuring The Rolling Stones.

The Beach Party Mystery by Peter Bartram is the latest “Crampton of the Chronicle” mystery series, all set in the city of Brighton in the 1960s. Like its predecessors, the story is told in a breezy, comedic style, with jokes (including some off-color ones) abounding. Crampton is nothing if not sarcastic, and Bartram displays the reporter’s character and mindset with what can only be personal experience.

Bartram has published several Colin Crampton mystery novels and story collections. He had a long career in journalism, including being a reporter on a weekly newspaper, an editor for newspapers and magazines in London, and freelance journalism – all of which have been utilized in creating the character of Colin Crampton. Bartram is also a member of the Society of Authors and the Crime Writers’ Association.

The Beach Party Mystery is fast-paced and easy reading, building toward a rather spectacular end that will leave the reader thankful for the skill of pickpockets, of all people.

My review of The Poker Game Mystery by Peter Bartram.

My review of The Comedy Club Mystery by Peter Bartram.

My review of The Tango School Mystery by Peter Bartram.

My review of Murder in the Morning Edition by Peter Bartram.

A Journalist and Crime – Stories and a Novella by Peter Bartram.

My review of Front-Page Murder by Peter Bartram.

My review of The Mother’s Day Mystery by Peter Bartram.