"Should Grace Fail" by Priscilla Paton 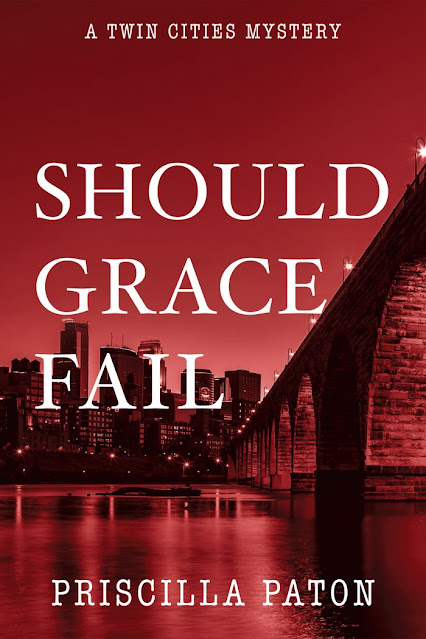 A body is found in a trash dumpster on the east side of St. Paul, and at first it appears it was dumped there. The victim suffered several stab wounds. Detectives Erik Jansson and Deb Metzger of the Twin Cities Greater Metro Investigative Unit, or G-Met, think it may be an unsolvable case. There’s no ID, no phone, no identifying marks, nothing to help identify who the victim might be.

Eighteen-year-old Jayln Dudek wants a career in music. She hangs out with an assortment of friends, some from the local Resource Center that helps addicts. She’s still mourning the loss of her former boyfriend, who unexpectedly ghosted her and disappeared. She’s worried about one of her friends, Luna, who is running around with a bad guy, or maybe he isn’t. But Jalyn has her music, and that seems the most important.

The stories of the body in the dumpster and the teenagers begin early on to touch, but just barely. The murder victim turns out to be a former policeman, who now spends a lot of time trying to help teens being trafficked. Some of those teens are in Jalyn’s orbit. The bare touches of the stories begin to change into bumps, intersections, and seeming coincidences.

Should Grace Fail is the second in the Twin Cities Mystery series by Priscilla Paton. It’s a story of addiction, trafficking, crimes not limited to the lower or middle classes, a victim who may have cared a bit too much, a detective who’s still not over his divorce, and a second detective still trying to learn the ropes.

The first in the Twin Cities series is Where Privacy Dies, published in 2018. Paton is also the author of Abandoned New England: Landscape in the Works of Homer, Frost, Hopper, Wyeth, and Bishop (2003) and a children’s book, Howard and the Sitter’s Surprise. She received a B.A. from Bowdoin College, a Ph.D. in English Literature from Boston College, was a college professor and taught in Kansas, Texas, Florida, Ohio, and Minnesota. She lives in Minnesota.

Should Grace Fail is not the expected police procedural. It aims a bit higher and it succeeds as something more like literary crime fiction. What’s impressive is how Paton captures a diverse array of characters, making each seem credible and fully believable. It’s a good story, worth the careful reading it requires.

Thank you for your insightful reading! Priscilla