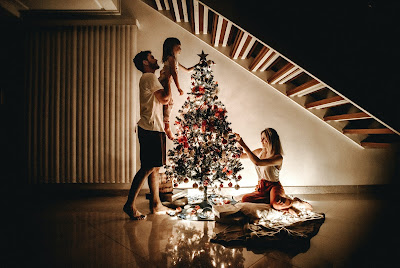 A Jane Austen lookalike, a holiday romance Down Under that may turn into something else, a boy who wants a dad (and a puppy) for Christmas, an unusual Christmas present from a sister, and a town so full of mistletoe that’s that what its name is– all are the subjects for Christmas novellas.

In Christmas with Miss Austen by Laura Briggs, Julia Allen works in a coffee shop and volunteers at a historic home in Delaford, Mass. For the house’s December program, she dresses as Jane Austen and reads from Northanger Abbey, in keeping with the Regency Christmas theme. One night, as she’s hurrying home across a city park, she bumps into what she hopes isn’t a mugger, and in her hurry to get away she unknowingly drops the book, part of an antique set loaned to Julia by a friend for the readings.

Eliot Weston is a young college professor who happens to be the “non-mugger” Julia bumps into. He’s taken by the woman in period dress, but she disappears before he can find out who she is. He does find Northanger Abbey in the snow, and that sets in motion a series of events that may lead to Christmas romance. It’s a fun read whether you’re a Jane Austen fan or not.

The Present by Toni Sheridan (a pen name for author Ev Bishop) tells the story of Candice Cane-Bryant, a 20-something trying to hold down a job and care for younger twin brothers, an adult sister, and a much younger sister. It’s a family that happened because of their mother’s bad choices (and three marriages), And Candice has all she can do to simply get through each day. And life is generally crazier when it’s the Christmas season.

Her younger adult sister is a nurse, and she unexpectedly brings home a fellow nurse, Dean Harlowe, whom Candice assumes is the sister’s new boyfriend. Dean isn’t the sister’s new boyfriend; he’d seen Candice and become interested. The sister talks him into something of a setup for Candice, but everything keeps going badly wrong. The story hinges on whether Candice and Dean will overcome bad ideas about each other and find the relationship both are looking for.

In An Aussie Christmas Angel by Clare Revell, Englishman John Connington has taken leave from his job to travel the world, and as December rolls around he finds himself in Sydney, Australia. And without a place to stay, except for a seedy hostel whose guests seem more interested in stealing from your suitcase. His sister had given him a name to call in Sydney in case he ran into problems, and he finds himself spending a week with two young women, one of whom is getting ready for the wedding.

The other young woman, Jo Heyward, is a bit put out having to accommodate a man and a stranger right before the busy Christmas season. But she decides to take to heart the Bible’s teaching about offering hospitality to strangers, and romantic interest suddenly and unexpectedly takes over for both John and Jo. But he’s returning to England after his week in Sydney. It’s an entertaining tale that happens to be based upon the true story of Revell’s brother.

In A Dad for Christmas, author Wendy Davy tells the tale of Reed Mason, a high school physics teacher in Virginia’s Shenandoah Valley. It’s nearing Christmas, and he notices his new neighbor, Emma Richards, in line with her young son Luke. He finds a letter to God on the floor (the kids drop them off at the post office), and the clerk asks him if he could take it home and pray for the anonymous child who wrote it.

The letter’s author is Luke, and he’s hoping for a new dad. His dad had previously died, and he and his mom had moved from North Carolina to Virginia to make a fresh start. Luke’s confident that God will answer his prayer, and that his new dad will also like puppies. But is Reed, not to mention Emma, ready for romance? It’s a sentimental, heartwarming story, but then there’s nothing wrong with sentiment and warm hearts, especially at Christmas.

Mistletoe Melody by Stacey Weeks is the story of Melody Staff and Quentin Oxford. For Christmas, Melody, her adult siblings and their children, and her parents are staying at the inn in Mistletoe Meadows on Cape Cod. The inn is owned by Quentin’s parents, and the two families had long ago been neighbors. All Melody really remembers of Quentin is how, during his wild senior year in high school, he’d gotten his girlfriend pregnant. It’s now years later, and Quentin is rearing his daughter alone and his wife cleaned up from drug addiction but then during from an overdose when she relapsed.

Melody is also taking drugs for multiple sclerosis, a fact her family is aware but which everyone has concealed from outsiders. Quentin can see something is wrong, but Melody refuses to explain. What Melody doesn’t know is that Quentin has become a committed Christian, something he doesn’t go out of his way to divulge to Melody. Will lack of openness and misunderstandings wreck a relationship before it has a chance to start?

Top photograph by Jonathan Borba via Unsplash. Used with permission.