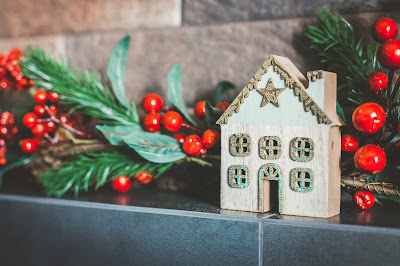 A boy breaks a date with his girlfriend for the winter formal, a young woman with a secret struggles when love finds at her, a delightful story about a high school junior struggling with the death of her father and whose life changes at Christmas, and the stalking of a Nashville country star. This group of Christmas novellas has something for everyone.

In Holly Hearts by Tanya Hanson, high school senior and part-time ranch hand Haggai Procter breaks his date with Elli Martin for the winter formal. The reason is that his mother is hiding something from him; she’s apparently sick and he believes they’ll need every bit of money to pay for expenses. The rest of his senior year, college, and a basketball scholarship look increasingly problematic.

Elli is disappointed, but she knows Haggai’s heart is in the right place. She, her father, and the large Martin clan at the Heart’s Crossing Ranch will help Haggai get through whatever it is he’s facing with his mother’s health.

Midnight Clear by British author Autumn Macarthur takes place in Huckleberry Lake, Idaho. Claire Robinson is the town’s schoolteacher, and she resists the overtures from town handyman Ryan Connor with snark, put-downs, and borderline anger. She knows she’s attracted, but Claire harbors a secret about her past in Texas that she knows will destroy any hope for a relationship.

Ryan is loved by the town, and more than one person is trying to play matchmaker between him and Claire. He doesn’t need convincing, but he knows that something must have hurt Claire in the past and hurt her powerfully. The crisis arrives when the two are thrown together to help a friend give birth.

My Secret Santa by Jaclyn Weist turns out to be something of a sleeper surprise. Claire is your typical high school girl – bright, athletic (she’s trying out for the basketball team), snarky, and sarcastic. She’s trying to get over the death of her father while helping her mother run the town diner. What she doesn’t need is a regular group of boys, led by Chad Damon, ribbing and insulting her whenever they eat the diner. In fact, instead of calling her by name, Chad calls her “Diner Girl.”

Claire’s English class gets an assignment that’s grown out of A Christmas Carol. Each member of the class picks a name from a basket, and the assignment is to learn 10 things about the person whose name you’ve drawn. Claire draws Chad’s name, and from that point on her life turns upside down, including being on the receiving end of online bullying by Chad’s former girlfriend. She soon finds herself falling in love with the guy who calls her Diner Girl. The strength of My Secret Santa is the sparkling dialogue by the characters, which is going to take you right back to high school.

And now for the stalker. In The Christmas Stalking by Lillian Duncan, Nashville singing superstar Destiny, aka Holly Stone., is on the run. A stalker is after her, and the incidents are escalating toward violence. She’s cut her hair, changed her appearance, and heads back to the upstate New York town of Serenity and Peace, where she spent many summers with her grandparents. No one is supposed to know she’s there, most of all the stalker.

She almost immediately connects with Robby Trenton, a childhood friend who’s now the town sheriff, when he stops her for speeding. She eventually tells him her story about the stalker, and he works to protect her and perhaps find who’s doing it. Three suspects emerge, including Robby himself. And then there’s a wild climax in the woods. The story stretches a bit thin at points, but the season often strains credulity.

Top photograph by Eugene Zhyvchik via Unsplash. Used with permission.