"The Waxwork Corpse" by Simon Michael 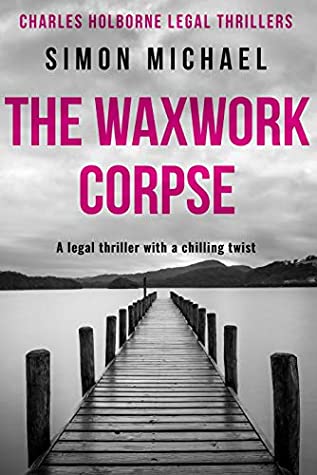 Charles Holborne, World War II hero, Cambridge graduate, and now a London barrister, grew up in London’s East End as Charlie Horowitz, son of a Jewish tailor, would-be boxer, and a young man unafraid to use his fists. With a growing defense practice spilling over to other attorneys in his chambers, Charles finds himself in an odd position. He’s being asked to prosecute a case for the Crown, and at first the solicitor bringing the case to him won’t tell him the name of the person being scrutinized for possible wrongdoing.

The person turns out to be a high court judge. The crime is the murder of his wife, whose body has just been found submerged in a lake. She disappeared more than a decade before. The woman flaunted her affairs with a succession of men, she treated their children shabbily at best, and she alienated virtually everyone who came into contact with her. The judge had borne her infidelities for years; what could have made him kill her at that particular time?

The home where the crime likely occurred had been sold to other people, but the police tear it apart, looking for evidence of murder. And they find it. The judge is charged, and the parties proceed to trial. Charles’s life becomes a bit more complicated when a man from his past recognizes him as someone who likely beat his friend to death during the London Blitz. And the man tries his hand at blackmail.

The Waxwork Corpse by Simon Michael is the fifth in the Charles Holborne mystery and suspense series, and it’s a fascinating turn for the London barrister. As the trial is set to begin, his father moves in with him, separating from Charles’s mother after decades of marriage. Charles has been estranged from his family; they’re observant Jews and he likes nothing better than a bacon sandwich. Cut off from the family for marrying a Gentile wife, a reconciliation has only recently been brought about. But things still are tense.

The author manages all of these threads expertly, winding them through each other so skillfully that the story seems less a mystery novel and more like literary fiction.

Michael is the author of five novels in the Charles Holborne series, with a sixth set to be published in November. He studied law at Kings College, London University and was called to the Bar in 1978. He worked primarily in the field of criminal law until the late 1990s, when he focused his practice on clinical negligence. He began writing in the 1980s and resumed it when he retired from legal practice.

The Waxwork Corpse is likely the best mystery in the Charles Holborne series, and that’s saying a lot, giving the quality of the stories that preceded it.