"The Body in the Transept" by Jeanne Dams 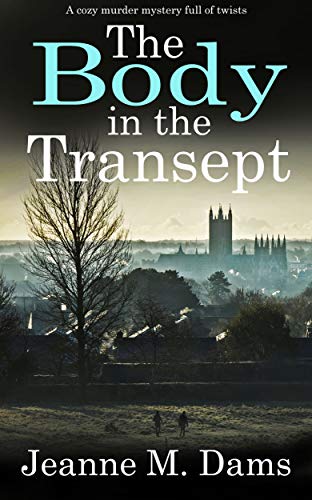 Dorothy Martin is a 50-something American widow living in the English town of Sherebury. Her husband died barely a year ago, and she continues to try to do what they had planned. But she’s lonely, somewhat miserable, and is still trying to figure out her life. She has a few English friends, and her next-door neighbor Jane Langland is a very good friend, but she’s at sixes and sevens.

It’s Christmas Eve, and Dorothy fights a bitter wind to attend services at Sherebury Cathedral. The church is crowded, but she finally finds a seat near Alan Nesbitt, who is chief constable for the county. He admires her hat (Dorothy has a penchant for unusual hats), and then the service begins. Afterward, as they’re leaving, Dorothy stumbles (literally) over what looks like a pile of old clothes in the darkened transept.

The clothes turn out to be the church canon, and he is very much dead. It looks like an accident, but the investigation will show that he’s actually been murdered elsewhere, and his body brought to the church. And just in time for the Christmas Eve service!

The canon was a gifted scholar; he also taught at Sherebury University. To everyone who knew him, he was obnoxious, sometimes rude, and, to a few, very threatening. Some church workers feared for their jobs. So did some university people. Everyone the man knew had a potential motive.

The chief constable, who’s more interested in Dorothy than she initially realizes, keeps her vaguely aware of developments. And then she decides to follow her friend Jane’s advice and get involved in something. What Dorothy chooses is to “help” investigate the murder.

The Body is the Transept by Jeanne Dams, first published in 1995, is the first of 21 mysteries in the Dorothy Martin series. Dams also has published seven novels in the Hilda Johansson mystery series. The author lives in Indiana, and, based on photographs, also favors the wearing of hats, much like her mystery heroine.

The story is well-written, with just enough clues to help the reader see who the likely murderer is. And The Body in the Transept has a rather thrilling climax that takes place in the upper reaches of the cathedral. With just enough of a hint of romance, it’s a well-done introduction to the rest of the series.