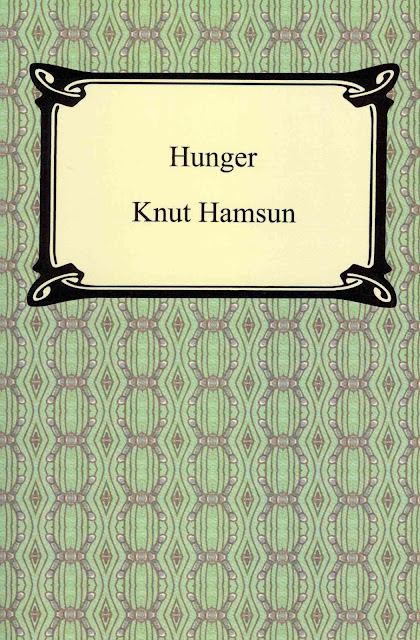 Knut Hamsun (1859-1952) was a prolific Norwegian writer of novels, plays, short stories, novellas, essays, non-fiction, and poetry. He was awarded the Novel Prize for Literature in 1920. He’s influenced writers ranging from Isaac Bashevis Singer and Thomas Mann to Arthur Koestler and Charles Bukowski. H.G. Wells was also a fan.

His first novel, entitled Hunger (or Sult in Norwegian), was published in 1890, and it brought him wide acclaim. A few sections of it had been previously published in a Danish magazine in 1888. It’s the story of a struggling young writer living in Christiana (now Oslo). Newspapers and magazine editors show little interest in his work, he hasn’t paid his landlady for his attic garret room in weeks, and he’s down to pawning his waistband and coat buttons to be able to buy something to eat.

We follow the writer through his daily, sometimes hourly, trials and tribulations. His clothes look increasingly worn. He’s lost considerable weight. He’s consistently conscious of eating and trying to write. He’s often his own worst enemy, and he’s constantly sidetracked by a person he meets on the street, a new thought, or a slight change in the weather. He pawns his waistband only to realize that his last pencil is still in a pocket. He falls in love even though he’s unable to even think of supporting a wife and family.

The novel, or actually the short novel, is one of intense self-awareness. Although it was published 15 years before, it reminded me of the opening of The Metamorphosis by Franz Kafka. It’s not a difficult read, but it is a challenging read. Even with its occasional flashes of humor, Hunger is often depressing, the writer’s physical hunger only occasionally relieved by the sale of an article.

The writer’s physical hunger serves as a metaphor for his desire to succeed as a writer. He hungers to be published (and support himself) as much as he hungers for food. His salvation will come with the decision and action of breaking into something entirely new and different.

Hamsun was a popular writer in Norway until 1940, when the Nazis invaded and conquered the country. He openly and publicly welcomed the invasion, meeting with a number of high officials including Adolf Hitler. After Germany’s defeat, Hamsun was arrested for treason and collaboration, tried, and sentenced to prison. Because of his age, he spent time in a hospital.

But all of that was in the future when he published Hunger. Some have called it the first novel of the 20th century, because of its heavy emphasis on the mind of its protagonist – what in a few years would be called psychology. But it is a story of mostly lows, relieved by a few short-lived highs.