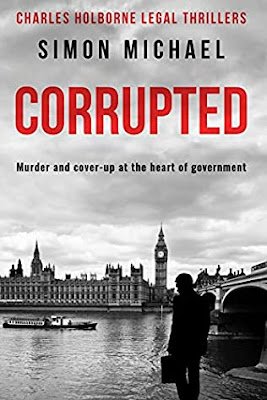 Reading Corrupted, the fourth in the Charles Holborne suspense series by Simon Michael, created a sense of “this sounds vaguely familiar.” The story is partially about a scandal that happens with UK politicians in the 1960s. But there have been so many scandals involving British (and American) politicians that I wrote off the sense of familiarity as likely due to something I reads in the newspaper. But when I reached the end of the story, I discovered that Michael based this story on real events and real people, even going so far as to use the real names for some of the characters.

I was right. I had read about it in the newspaper. That’s why it seemed so familiar.

It’s the mid-1960s. Holborne, a World War II hero and a Cambridge graduate, is a highly successful barrister. He works for a law chambers that handles mostly criminal cases, and his success in both defending and prosecuting criminal cases makes him something of a “rain man” for his colleagues. But several of them would still like to see him gone. They don’t like his reputation, and they don’t like the fact that, before he was Charles Holborne, he was Charles Horowitz, an East End Jewish boy who knew a lot of rough-and-tumble days.

A “rent boy” Holborne helped in a previous story shows up at his office with 100 pounds, asking him to take on the case of a 15-year-old boy accused of murder. The usual process is to go to a solicitor first, who then contacts a barrister, so Holborne has to do some quick stepping to get the procedure worked out correctly. The boy charged with the crime seems completely resigned to his fate, and only gradually does Holborne draw him out into explaining what happened.

What Holborne learns is that his ongoing collective nemesis, the gangster Kray Twins, are involved, and they want the boy dead. The boy knows way too much about two members of Parliament, one Conservative and one Labour, and if his story goes public it will bring down the government.

Corrupted weaves a story that grabs you by the throat and won’t let go.

Michael is the author of five novels in the Charles Holborne series, with a sixth set to be published in November. He studied law at Kings College, London University and was called to the Bar in 1978. He worked primarily in the field of criminal law until the late 1990s, when he focused his practice on clinical negligence. He began writing in the 1980s and resumed it when he retired from legal practice.

The author’s knowledge of the law informs the courtroom scenes, as it has in the previous novels. Watching the back-and-forth and the brilliant work done by Holborne before the judges is simply captivating. Corrupted joins the previous Charles Holborne novels as an outstanding suspense novel.