“The Art of the Commonplace” by Wendell Berry 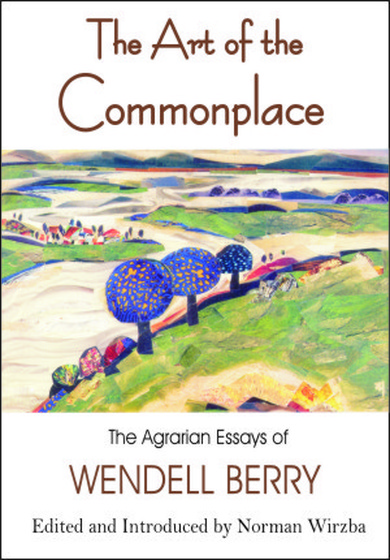 About 15 years ago, I was having a conversation with a friend who handled issues for an agricultural company. He was doing some handwringing over people’s virtual rejection of the kind of company he worked for. It wasn’t the customers; it was the media, academics, activists, and public interest groups. I told him that he needed to understand and be able to respond to Wendell Berry if the company was going to succeed long term and win the hearts and minds of people.

He looked at me like I was crazy. He had never heard of Wendell Berry, and that was a big part of his problem. The agrarian philosophy articulated by Berry, and articulated consistently for several decades, had everything to do with the issues my friend was dealing with. And it’s not like that philosophy wasn’t readily available. Berry has been writing and publishing since the 1960s.

His agricultural and agrarian philosophy is a part of a broader system of thought about place, community, stewardship, and faith. He has expressed it in essays, novels, short stories, poetry, speeches and interviews. The agrarian essays have been collected and published as The Art of the Commonplace: The Agrarian Essays of Wendell Berry. Edited byNorman Wirzba, the Gilbert T. Rowe Distinguished Professor of Theology at Duke University, the 21 essays collectively represent the man’s thinking on the land and how it’s used and misused.

After reading the collection, it can be said that reading one essay is like reading them all. Not because he is repetitious, for he is never that, but because he is holistic, writing from a unified perspective. (In some cases, he’s speaking, for several of the essays are speeches.) You might disagree with what he says, but he always makes his points with consistency, politeness, and insight into the human character as well as the wiles and strategies of the modern culture.

The essays, written from the 1960s to the 1990s, cover a diverse array of subjects, all related to Berry’s agrarian philosophy. These include what he calls “the unsettling of America,” feminism, racism, marriage, health, land, community, conservation, pleasure, the idea of a local economy, energy, eating, and the role of Christianity. His Christian faith informs and infuses his agrarian ideas; he might say there is no difference between his Christian faith and agrarianism.

What’s fascinating is how Berry ties our understanding of the land into a host of related areas, like the division of roles in marriage, racism, technology and technological progress, and the mentality of exploitation. And he says that the purpose of technological progress is not love of God, family, or country, but money and ease. And right there he pits himself against not only Big Agriculture but also Big Government with its hordes of experts. His assessment of the World Trade Organization, for example, sounds a lot like the assessment by President Trump.

Berry is an important figure in agriculture and America, and the essays in The Art of the Commonplace go far in explaining why. It’s a solid collection, assembled and organized well, and represent the man’s broad thinking on agriculture, land, and people.

My review of Berry’s That Distant Land.

My review of Berry’s Jayber Crow.

Wendell Berry and This Day: Poems at Tweetspeak Poetry.

Wendell Berry’s Our Only World.