"Ghost of the Hardy Boys" by Leslie McFarlane 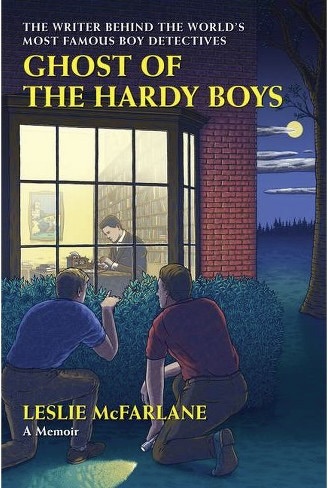 Leslie McFarlane was a young newspaperman, working on the Springfield Republican in Massachusetts. A Canadian by birth, he’d grown up in the mining country of northern Ontario. One day, he saw an ad from an outfit called the Stratemeyer Syndicate that was seeking writers. His salary was something of a pittance, so he sent a letter of application.

He received a package of two books and an explanation of how the syndicate worked. For each of the books published in a series, he would be paid $100. He would be provided a full outline. The books would not be published under his name but instead use a pseudonym. He could also never disclose he was the real author.

Given what his salary was, he accepted. A trial run was undertaken with the Dave Fearless series, several books of which had already been published. He passed the test of writing two chapters. He was hired as a freelancer, and he continued his newspaper job. After turning in several manuscripts, and being paid $100 for each, he was given a new project, one involving two brothers living in the fictional town of Bayport and who were amateur detectives. Frank and Joe Hardy were being born.

The Stratemeyer Syndicate was the genius of Edward Stratemeyer, who had picked up the legacy of the Horatio Alger stories. Stratemeyer has a number of popular series in publication, with The Bobbsey Twins being the most popular and Nancy Drew and The Hardy Boys almost as popular. These books, often sneered at by literary types, were likely the most popular children’s books of the 20th century, until the arrival of the Harry Potter stories. And they still sell.

McFarlane published his memoir of how he came to be “Franklin W. Dixon, author of The Hardy Boys,” in 1975 as Ghost of the Hardy Boys. The publisher Godine has reissued the book, smartly designing it to look like one of the famous Hardy Boys book covers.

And while it describes just about everything you want to know about the books and the author, it’s also McFarlane’s story. It describes his upbringing in northern Ontario, how he became a newspaperman, the people (and characters) he worked with in various newsrooms, and how he came to write the famous series, and how he ended it.

McFarlane is a born storyteller, including how his son discovered he was the author of what the boy knew, if his father didn’t, as the most famous boys’ book anywhere. He’s also funny, ironic, tongue-in-cheek, and high entertaining. Reading Ghost of the Hardy Boys is almost like reading one of the Hardy Boys mysteries; it uses that same light fast-paced, and cliffhanging style.

It’s a real treat to read how my favorite mystery series from childhood came to be.

The Hardy Boys and Chip Hilton were two of my favorite books to read growing up. I would hide them behind my school books during class and read (do you think the teacher knew. But that may also explain the grades I got). This sound really interesting to read. I'm going to have to look this one up.