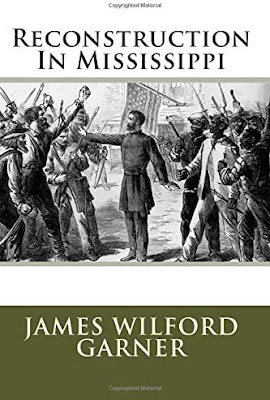 James Wilford Garner (1871-1938) was born and raised in Pike County, Mississippi, the same county where my paternal great-grandparents were born and raised (during the Reconstruction period, the state legislature split the county into two, with the southern half retaining the name and the north half being renamed Lincoln County). Garner graduated from the Mississippi Agricultural & Mechanical College in 1892 and went on to study at the University of Chicago and Columbia University.

Garner would become a professor of political science at the University of Pennsylvania and University of Illinois, and he also did extensive teaching work in India. He co-authored a history of the United States with Henry Cabot Lodge, and he published a number of other works on government and political science.

The work he is best known for is his Ph.D. thesis, published in 1901 under the title of Reconstruction in Mississippi. It firmly established him as what was then called the Dunning School, named for Columbia professor William Archibald Dunning. The school of thought generally favored a conservative, more pro-Southern understanding of the post-Civil War Reconstruction period.