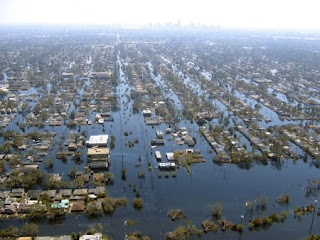 I changed my mind. I wasn’t going to write about it.

August 27: My then 82-year-old mother tells me she is not evacuating New Orleans. She and her older sister decide they will stay in my mother’s house in the suburbs near the airport. They’ve been through many hurricanes before, and they know what will happen.

August 28: My aunt, who lives on Jourdan Avenue in the Lower Ninth Ward, is dropped by one of my cousins at my mother’s house. The Lower Ninth flooded during Hurricane Betsy in 1965. My cousin offers to take both my mother and aunt to Baton Rouge to another cousin’s house. Both sisters, who come from stubborn Germans on one side and opinionated Creoles on the other, refuse to go. “We’ll be all right. We’ve been through this before. What’s the worst that could happen? We lose electricity for a few days?” I don’t like the answer but I understand it; I’ve been through hurricanes in New Orleans, too.

August 29: Katrina comes ashore between New Orleans and the Mississippi Gulf Coast. The eye passes almost directly over my brother’s house in Washington Parish. Years ago, Washington Parish was a place of small towns and farms. Now it is still that, but it’s also becoming a northern suburb of New Orleans. We will not hear from my brother and sister-in-law for a week.

August 30: President Bush declares “we’ve dodged a bullet;” it appears that New Orleans has indeed missed the big one. I talk with my mother on the phone; they have no electricity but they’re okay.

That night, I’m sitting in a parents’ function at my youngest son’s high school when my BlackBerry buzzes. My youngest brother who lives in Houston sends this email: “The 17th Street Canal levee has broken; the city is flooding.” He knows, and I know, what that means: the 17th Street canal borders Jefferson and Orleans parishes and is connected to Lake Pontchartrain; the levee has broken on the New Orleans side. The West End, Lakeview, Lake Vista – some of the wealthiest parts of the city – are flooding. The wealthy sections on the Jefferson Parish side are also flooding.

Then come reports of other levee breaks. The Industrial Canal levee near the London Avenue Bridge, six blocks from my aunt’s house, had borken wide open. The levee along the Mississippi River-Gulf Outlet has reportedly dissolved; 90 percent of St. Bernard Parish is underwater. The cousin who tried to take my mother and aunt to Baton Rouge lives in St. Bernard, and she would later tell me, in a way only a native New Orleanian can, that her house had only six inches of water – on the second floor.

Eighty percent of the city of New Orleans will be under water in less than 24 hours. More than 1600 people will die in the New Orleans area and another 200 on the Mississippi Gulf Coast.

August 31: Miraculously, my mother still has phone service, but no electricity or water. And the flooding stopped about a mile from her house. Trying to call her is problematic at best – virtually impossible unless it’s 11 p.m. to 5 a.m. She had filled the bathtub with water, but that is fast disappearing.

In the meantime, we’re trying to track down relatives. They’re scattered across several states. Some had evacuated; some got out right ahead of the storm. Two elderly cousins, who lived in an especially low area of the city, can’t be found. There’s some comfort in knowing they live on the second floor of a duplex.

We still can’t get through to my brother in Washington Parish.

In the meantime, we watch the tragedy of incompetence play out on national television. The news media seem to have no trouble getting into the city; the federal government makes one misstep after another; and I could have told anyone that the state government would be worst than useless.

So people did in Louisiana what people did in Mexico City after the 1986 earthquake. They ignored their governments and undertook rescue operations themselves. Government at all levels failed in Hurricane Katrina. That failure would only get magnified when studies and reports afterward detailed the singular failings of the Army Corps of Engineers.

I join millions in going to the internet. The New Orleans Times-Picayune set s up a massive message board system, organized by regions and even neighborhoods. People swap critical information – like how to get around the roadblocks on the highways to get into the city to rescue family. (I admit it; I helped people do that. The neighbor of my mother’s who slipped past the roadblocks, the man who would take the two sisters in their 80s out of New Orleans in a pickup truck and bring them to my nephew in Lafayette, tells my mother how he did it. She tells me. I tell lots of people on the message boards. It’s so obvious that only the federal and state governments miss it.)

September 2: My mother and aunt leave with a neighbor for Lafayette and safety.

I don’t recall what day it is, likely about a week or so after the storm, but I dial my sister-in-law’s cell phone, and she answers. Their home in Washington Parish is intact; every tree on the property (40 acres) is down. The local neighbors have banded together to feed each other, help each other – and fend off any potential looter.

About the same time, a retired U.S. Army serviceman in Seattle I find on a message board helps me find the two elderly cousins – a grandson had convinced them at the last minute to leave with him, and they drove all the way to Cleveland, Ohio. We will learn later that the flood waters for a time covered both stories of their two-story duplex.

August 28, 2010: The Wall Street Journal publishes a five-year Katrina retrospective on one small stretch of homes in the Lower Ninth Ward – the 800 block of Jourdan Avenue. It is exactly that block where my aunt lived in her pre-Civil War home. (There is an online sidebar to the story -- and my aunt's story is third one down the list -- Laurentine Ernst.)

And that awful week is suddenly happening all over again.
Posted by Glynn at 8:53 AM

Great post. It must've been something. My sister lived and still lives in Belle Chasse.

I'm so sorry all that pain is coming up again; how lovely that your family managed to survive.

And thank you for sharing so beautifully how that played out for you.

PS: I passed an award to you on my blog today...

the Calgary Herald has an article today about New Orlean's resilience. I was stunned to learn some of the statistics -- the city decreased pop by 50%. 75% are back...

What an amazing place. What amazing people.

I too am sorry today brings so much pain back for you -- and am grateful you chose to write it out so eloquently and beautifully from your heart.

and PS -- I too passed an award on to you today.

You write the truth in such a grace-filled way ...

Reading your post is like being there. We were in Portland, Maine, when the hurricane hit and everyone was where we were staying was trying to get news about friends there.

The picture you include tells well the story, too. Truly unforgettable.

anniversaries are for remembering.
and i am honored to remember this along with you today. the good, bad and the ugly of it.
to learn more about what happened, to remember how many lives were changed, and the fact that many are still dealing with the changes that it brought.

so many stories, is what i think, as it look at that photograph.

and your story is also a very good look at the state of the united states' government.

I can't imagine. But I'm glad you wrote about it.

I'm so thankful you're all okay.