Submission is Not a Passive Thing 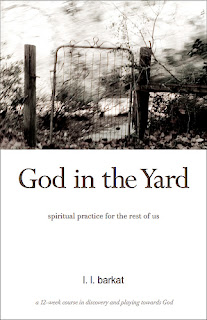 I was doing fine reading God in the Yard: Spiritual Practice for the Rest of Us by L.L. Barkat. I even made it through the chapter where I was supposed to lay down in the yard. And then I hit the chapter that’s about that word.
You know the word. It’s one of my most unfavorite words in the English language.

I was momentarily encouraged when I read Barkat’s definition: “’Sub’ means ‘under.’ But true submission is more like the art of working with a person or situation, the way the steam from my teacup works with the breeze.” (I should say I was encouraged because of the reference to the teacup. I thought it didn’t apply to me because I drink coffee; then I realized that steam rises from a coffee cup, too.)

“Sub” does indeed mean “under.” And “mission” comes from a Latin verb (after being laundered by the French), mittere, to send or let go. It’s an action. In fact, the whole word describes an action. There is the action of understanding the person or situation, seeing a need in the other person or yourself, and then resolving to do something. There’s nothing passive about submission. It is, as Barkat suggests, a “working with.”

This immediately reminded me of a time when submission and I were strangers, and we shouldn’t have been.

A long time ago, I was caught up in one of those convulsive corporate organizational things, which involved a kind of dividing the sheep from the goats. It was not a foregone conclusion where I would end up, but at some point I must have rubbed someone the wrong way for I found myself assigned to the goats. And working for the worst boss one could imagine: insecure, mean, vindictive, and something less than fully competent. The one positive thing I could attribute to this boss was consistency.

I knew this going into the situation. I resolved to try to make it work. It lasted as long as the boss thought I was useful – about eight months. For those eight months, I thought there had been a fundamental change in the personality. Then it changed. And it changed overnight. Life at work became awful – and what I didn’t know was how actively the boss working behind the scenes. I was walking around with figurative knives all over my back.

I was partially rescued – a friendly executive had me moved to his team. But my work moved with me, and the old boss took that as a slap in the face and redoubled the efforts. Lies, half-truths, smears – the old boss stopped at nothing. It was not a fun time. The old boss eventually succeeded – I found myself being out in a downsizing wave. I found out before the proper time to tell me – my old boss couldn’t resist giving me the message.

However, the old boss had done too good of a job – and got caught in the same downsizing wave.

I would like to say that I submitted to the authority here, that I “came along side.” I did, for a time. And then it became an active effort devoted to self-protection. I stopped being nice. Mediating sessions hosted by HR became opportunities for me to crush the lies, and I did, and I did it ruthlessly, to everyone’s mutual embarrassment and discomfort. Which only made the situation worse. I was truthful; I was candid and straightforward; after all, it was my reputation that was being trashed. No one would have called me submissive, no matter what the definition of the word might be.

What would I do differently now? I don’t know. It was a hard situation and was very, very hard to go through it. It wasn’t a case of being trashed because of my beliefs or faith; it wasn’t what a lot of us might call “persecution” in the sense of one’s faith.

It was more about eliminating a perceived threat, even if it meant negative consequences for one’s team and work.

As if I needed reminding, I did learn that we live in a fallen world, and I’m a part of it.

Home by Laura Boggess at The Wellspring.
Posted by Glynn at 6:14 AM

Submission? Oh yes, that thing where we get the opportunity to be torn apart and rejected after we painstakeningly pick just the right place to send our babies! I have such a difficult time submitting, mostly lazy. However, I'm going to my very first writers conference this year. Maybe I'll be more willing now?

I had to grin when I saw the name of the post because just last night (well, i guess early this morning, at 1AM) i wrote about Submissive Obedience...

I hear ya on the fact that it's no fun being submissive when the one you submit to isn't loyal and trustworthy... sorry about your boss - i can only imagine what you went through.

at the same time, your post made me thank God once again for my boss where i work :)

What a great post. That "obligatory submission" is really just another way to control the situation. I have done it myself. "I'll follow your order -- just like you said -- and i won't be happy about it and i'll make sure it doesnt work."

Glynn, I hope I made it clear in that chapter that I don't believe submission is a take-all-the-crap-all-the-time kind of thing. That seems to be the way a lot of people look at it. Jesus mostly didn't "submit" in many situations where we today might think we're suppposed to "be nice and submit."

There's such a difference between his and our often needy approach to submission.

Anyway, maybe you got that from the chapter, but I couldn't help saying it again :)

I like to think of submission as being under-- not His thumb, but His grace.

I much prefer the sense of presenting for consideration, the more positive definition, as in offering the truth, as you did. Sometimes, that's all you can do. And sometimes, that's enough.

My favorite definition? "Voluntarily placing yourself
underneath another to lift them up to become all
they can be" This isn't being a doormat or being willing to be abused......

Subject one to another is refers to same thing.

Love the dialogue here. :) "What doesn't kill you
makes you strong" right?

Thanks for sharing such honest feelings and thoughts. I've been through similar challenges...and am still learning the "S" word...

i have thought i knew things, going into a situation, and realized later, that the reality of living the the situation was a bit different than what i thought.

and like you said at the end of your post, "I did learn that we live in a fallen world, and I’m a part of it."

is that lesson that we learn from working-with, or submitting, in the place we are in, using what we know and have?
when we work together under God, we fail at it, and learn. actually, we are taught.
we realize we need Jesus, because we live in a fallen world, and we are all part of it.


the message...you just wrote, here, years after "working-with", is being shared.

you didn't know then, that you would end up doing that when you were in that situation.
~

because i don't know all...

in other words, we see as through a haze.
kind of like our eyelids are closed, but, we can still tell the light from the darkness.

I would not, could not, did not submit.

Though -- I would have stood up for myself at the time if I'd known then what I know now.

either way -- there are fallen. And there are those who step all over the fallen in their attempt to control where 'sh@*' falls.

I like your story. It's very honest and open and -- I think you're amazing!

A tough one, Glynn. I tend to agree with L.L. and Maureen. Sounds like the truth was the most important action here.

One of my favorite quotes from this chapter was when L.L. tells us why we would want to submit.

"For the purpose of putting on the best life-party possible."

I like that. I don't know that "submitting" in the case you describe would fit this litmus test, Glynn.

I've said it before, I'll say it again. You are such a wonderful role model. I'm glad for your sharing.

I think we may have had the same boss! Thankfully, I have a wonderful boss now but I do know how difficult it is to work for someone who does have not his people's best interests at heart - not to mention working for someone who is just downright mean. It helps me to remember who I really work for. But I have learned the blessing of speaking the truth, even when others are too afraid to do it. Thanks for the post.

And now that I think about it, I'm not sure the Lord asks anything of us that's active rather than passive. I'm going to be pondering that a while.

I read this post last night and figured out that I probably had a few days before I'd reach that chapter in the book. Then, I turned off my computer, climbed into bed and opened my book to...yep. That very chapter was next up for me. God is surely laughing at me.