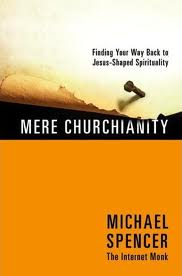 An executive for whom I worked for several years was fond of saying “policy is what you do, not what you say,” the corporate business version of “actions speak louder than words.”
Does the same principle apply to churches? I’d tend to argue that churches – or “the church” – should be the living embodiment of “doing” – and letting “doing” be the what and how of “saying.”
Michael Spencer, in Mere Churchianity, says that millions of people are leaving the churches because what’s on the sign outside the church isn’t matched by what is actually happening inside the church. I’ve lived through an experience like this, where the “do” became so disconnected from the “say” that it nearly tore the church apart.

It wasn’t on a sign (although the vision statement was displayed on banners) but this is what was said: “We are not trying to be the next Willow Creek.” The “do,” however, was just he opposite. And the “do” was taking the church down a very destructive path.

Relationships were damaged. Friendships ended. Founding members of the church were driven away. Teaching moved away from the Bible and toward books by John Eldredge and The Prayer of Jabez.

The canaries in the coal mine left first. What started as a trickle of departures was masked by an initial surge in attendance. The trickle became a flow, then a flood. We left at the tail end of the flood.

And we left damaged. I wish I could say something else, but that’s what happened. By “damaged” I mean hypersensitive to any kind of change.

When our current church moved to change the format of one of the worship services, we freaked – that’s exactly how it had started before. An elder acted tone-deaf when we asked a question – we had seen that glazed-over, “they’re not with the program” look before.

This has had the effect of building walls, avoiding any involvement beyond the bare minimum, a reluctance to get too close to people in the church because it could all blow up again and you want the freedom to be able to walk out – and immediately.

I was one of those people Michael Spencer wrote his book for.

My review of Mere Churchianity.

My article on the book for Christian Manifesto.

Bend the Page, a place to discuss Mere Churchianity.

When Church Signs Lie by Fatha Frank at Public Christianity.
Posted by Glynn at 1:17 PM

Well, you and I had a very similar experience. I read this and was amazed that I got the same bottom drop out of my tummy/falling several stories feeling that I had then. Ours was complicated by the rest of the family being members of the same congregation and some of those being the ones initiating the Willow Creek push.

Then, I thought we are what we are, we cannot be someone else, God knows us through and through - he can take us/change us/bring us wherever we need to go without plastic surgery. I thought: to be real, you have to be who you are otherwise the story is lost. The story takes in everything, every step along the way whether one likes the way it sounds or looks or not.

I'm sorry, this is too short a space to describe it or be clear. And talking about it, really stirs the pot unfortunately. But thank you, is some comfort to know others understand some of it is like.

Melissa -- I can't imagine having to deal with church issues like this that are also family issues. Just thinking about it makes my heart ache. You can leave a church -- but how do you leave a family? I don't think you can ever do that, even if you're physically removed.

Jason - Thanks for comment. I have to keep telling myself that there's always more at work that we can or ever will see.

All I can say, sadly, is amen.

Glynn -- Oh, churches and the people in them have to walk so carefully in the spirit to avoid this. I've seen my church weave over and across this line, only to come back and start living it again. But I'm holding my breath, in a sense. I really want to read this book.

Trying to model one church to be just like another with the intended result of bringing more warm bodies in on Sunday morning is simply a disaster waiting to happen. Church leaders will deny that's what they're trying to do, but I know better. (Not all, mind you. But way too many.)

My church is unlike any other I've ever attended. We modeled our church after Acts 2:42 and kept to the K.I.S.S. principal.

Love. Live. Serve. -- It's our mission and our methodology.

It works for us, but it may not work for another body of believers. Unfortunately, I've been down a similar path as yours. We stuck it out and saw some things I really wish we hadn't. But a bit of distance and time has done wonders for the healing process.

Ouch! Sorry to hear that. Tough, and when I read this, as well as consider my own experience, it's so easy to see how people either settle for getting lost (coming in and out) of a mega-church, or simply quit attending church altogether, participation having already ceased.

Yes, I want to read that book as well.

Glynn, I'm ashamed to say I've been on the opposite side. The one with the glazed-over eyes, not understanding why someone would want to leave, pointing at growth while ignoring those who were leaving. I'd like to think I've matured. Books like How to Follow Jesus Without Embarassing God, Sticky Church, Living on the Edge, and now Mere Churchianity strike a chord with me because I am determined to repent of my past sins in this area and try to steer (at least what's within my power) my church in a direction that is healthy and Christ-like. At times I feel like I'm fighting this battle alone, but it's a battle I believe is worth fighting.

I feel that way about Messy Spirituality and even more recently Permission to speak freely by Anne Jackson.