Rouault, Fujimura and Hearts and Minds 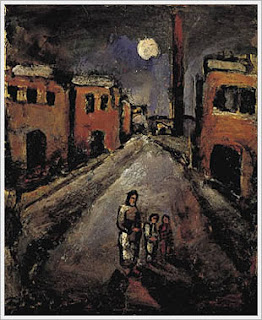 I will be honest. I had never heard of French artist Georges Rouault (1871 – 1958) before I read Rouault/Fujimura: Soliloquies by Thomas Hibbs, which includes a “refraction” or essay by Makoto Fujimura (1960 - ). Soliloquies was written to accompany an exhibition of Rouault’s and Fujimura’s art at the Dillon Gallery in New York City in late 2009. I started reading it, and felt somewhat cretinous for not knowing about Rouault.

I bought this book because Makoto Fujimura tweeted on Twitter that it was named a “best book of 2009” by Hearts and Minds. I had read Fujimura’s Refractions and posted on it in January.
What a gem this little book is. Not only do you gain a sense of whom Rouault was and what his art was about, you also learn just how important this artist was to contemporary artists like Fujimura and the idea of expression of faith and belief through art and in art.

Thomas Hibbs, who wrote most of Soliloquies, has provided what is almost a spiritual meditation on the two artists, art and the idea of “soliloquies” as almost a kind of dialogue. He reaches out to and pulls from sources as diverse as St. Augustine, T.S. Eliot, Jacques Maritain and Simone Weil. 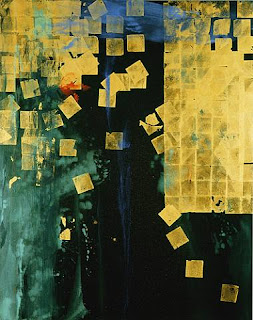 Rouault is important in understanding Fujimura’s work because the French painter, who died two years before Fujimura was born, has had such a significant impact on Fujimura's thinking and understanding. Here is Rouault as described by Fujimura:

“Like the Rembrandts he valued and imitated as a youth, and the Cezanne he celebrated in his letters and poems, Rouault paintings capture not a mere reflective, descriptive light, but Light behind the light, Reality behind the reality. They are generative and seem to grow more and more pregnant as they age. Rouault may yet prove to be the first twenty-first century painter, bringing synthesis out of an age of fragmentation.”

Soliloquies is a small book, all of 63 pages, with reproductions of some of the paintings exhibited and photographs from the exhibition. And it is a beautiful small book, a gem that contains so much understanding that I’ve read it three times, and still find new things to appreciate and ponder.

I also feel a little less cretinous than I did before. At least I know who Georges Rouault was, and perhaps is.

An Aside:
I bought the book through Hearts and Minds Bookstore’s web site. Physically located in central Pennsylvania, Hearts and Minds’ web site is – to me – exactly what it should be. The store specializes in books about faith and Christianity, and the web site includes a blog about some of the books it sells; book reviews; and news. I suspect that visitors to the web site receive the same kind of care and attention that customers in the store do. When I placed the order, I received an email confirmation and a second email (from a real person) asking me how I had heard about their store and what I was interested in reading.

Bottom: Soliloquies by Makoto Fujimura
Posted by Glynn at 6:23 PM

One of the wonderful things about you is your willingness to learn something new, as is always evident in posts like this. "Cretinous" you certainly are not!

Pairing Rouault and Fujimura is brilliant. I wasn't aware of this book and just added it to my list (is it possible that list will ever stop lengthening?), and starred it, too, given your recommendation.

The artwork by Fujimura that you show here is stunning.

Thank you for the tipoff to Hearts & Minds. I just went on the site. Very nice!

I am learning so much just reading your blog Glynn. I feel like a little preschooler just toddling along. Thank you so much for sharing the rich mine of your experience. I have so much to learn.

Cretinous? oh my. Never you.
I did know of Rouault. I did not know of this book nor of Heart and Minds.
What great finds.
thanks! Louise

I like that ... "Light behind the light, Reality behind the reality." He truly sees ...