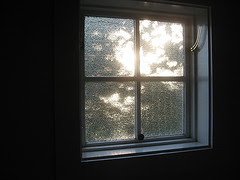 You were there to live the vow,
sickness and health, richer and
poorer, and you’ll be there until
there’s no vow left to
live, except it always will be,
at least for us, because the
vow was meant, intended, designed,
believed and lived to be eternal.

"Window," photograph by nAncy of Poems and Prayers. Used with permission.
If you’d like to read related posts on faithfulness, check out the One Word Blog Carnival over at Bridget Chumbley’s place.
Posted by Glynn at 10:16 PM

Each time I read what you write about Janet, I feel as though I'm hearing you say your vows to each other.

Your sons could not want for better models of what it means to be faith-full in a marriage, to be "there" for that much of life with another.

God's blessings to you both.

What a beautiful tribute ...

Faithfulness such as this should be common and normal. It is neither. The four loves represented here.
You both chose well. Be blessed for honoring your wife so deeply.

To say this was beautiful, almost sounds cliche. But, it really was.

Until I read everyone's comments here, I seriously thought you were writing about God.

Now, I see it was about your wife.

What a holy matrimony you are blessed with, Glynn!

I particularly love the commitment to be there for better or worse in the marriage ceremony..married life is generally full of both.

What a beautiful, wonderful tribute. This blessed me today. Thank you, Glynn.

Perfect. Absolutely perfect. Can I steal it next Valentine's Day?

This is so very lovely, and yet so grounded in the real of life. Thank you for sharing this.

This one brought tears, Glynn. And that's not an easy thing to do.

So eloquently written. This really touched me, Glynn. Thank you!

An awesome "window"...thanks for sharing and allowing us to peek through it.
Peace,
Jay

Gynn, I liked how you defined the vow, "Through sickness and health, richer and poorer...as meant, intended, designed and lived to be eternal that you and your wife will be there for each other." Sometimes it can be such empty words even in the beginning of relationships. We need to hear more love stories. Thanks always for your encouraging words!

Wow -- you truly have a gift for capturing the essence of deep feeling without the slightest hint of cliche. Thanks for sharing.

What a blessed woman your wife is, Glynn. This is so moving. Did she cry? I did.

I had the same thought as Bonnie ... When I read it, I could have just as easily thought this was about God. I'm guessing, in effect, it is about both of them. Your wife, yes,
and this God who lives
within her.

It is a joy to read about your marriage. :)

What honor and love you show.