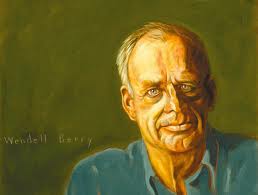 Novelist, essayist and poet Wendell Berry is a kind of living icon for Christian writers and environmentalists, especially “crunchy cons,” those conservative Christian believers who eagerly and rather joyfully embrace an environmentalist ethic (and I would have to count myself among that number, at least to some degree). There are good reasons for his iconic status.

First, Berry is a fine writer and a fine poet. His work embraces a considerable body of novels, short stories, poetry and essays.

Second, Berry is a writer who happens to be a Christian, and his faith is not an obstacle for readers and critics who don’t share it. 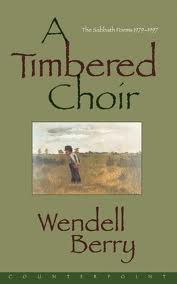 Third, his writing is all of a piece, a coherent worldview and way of understanding the world. It is a worldview with deep roots in the American agrarian tradition, a reverence for the land and a reverence for the human connection to the land. And that reverence leads to what Berry sees as the contemporary “disconnect” between the vast majority of people and the land, the source of physical and even spiritual sustenance. From Berry’s book of poems A Timbered Choir (1998):

I have again come home
through miles of sky
from hours of abstract talk
in the way of modern time.
When humans live in their minds
and the world, forgotten, dies
into explanations. Weary
with absence, I return to earth.

A Timbered Choir contains some of Berry’s most articulated environmental views, as least as he expresses them in poetry form. These views are more pronounced, sharper, even darker in Leavings: Poems (2010):

If we have become a people incapable
Of thought, then the brute-thought
Of mere power and mere greed
Will think for us…

What’s interesting is that Berry does not articulate some concept of a return to nature, or “back to the woods;” instead, it is an agrarian view of small farms and abandoned small farms, with trees growing where fields were once tilled and planted, once-sturdy barns weathered and collapsing, symbols of a people disconnected from their ancestral roots.

Berry develops these same themes and ideas in his novels and short stories, and one compact place to see them all is in That Distant Land: The Collected Stories (2004), which not only includes 23 short stories but stories arranged in chronological order – not in the order they were written but in the order of the time in which they fictionally occurred. (Berry’s seven novels are included in the list to show as well where they fall in the overall story narrative.)

He tells wonderful stories, stories that are geographically compact. They are all set in the fictional Port William region, in Kentucky along the Ohio River across from Indiana. The stories explore both people and the land, and how they interrelate, and Berry writes with both humor and serious purpose. We meet people like Ptolemy Proudfoot and his wife Miss Minnie when they are courting and when they are an old married couple; Elton Penn as both a 12-year-old driving a Model A and a young farmer striving to create a batter life for both his well-born wife and himself; Wheeler Catlett, who “inherits” the care of his alcoholic Uncle Peach and later helps Elton Penn gain ownership of a farm; and Uncle Peach himself, who we meet in a drunken stupor in a Louisville hotel and eventually bid farewell to at his funeral. (Wheeler as a boy and Uncle Peach made new appearances in a short story by Berry published in the Oxford American Magazine last fall.)

And the land – the land is always a character in Berry’s stories and poems, perhaps the main character. He writes about the land in religious and Christian terms, using words like faith, resurrection, heaven and Sabbath. “The land must have its Sabbath/or take it when we starve,” he writes in A Timbered Choir.

And, Berry writes in his stories and poems, we moderns, we “industrial aliens,” live cut off from the land, from our agrarian past. Because of that, we have lost something, not just our history, but also something of our very souls.

Thank you Glynn. Berry is one of my go to poets. I have read mostly his poems but you and and another writer friend (who has a small working farm) have whetted my appetite for his stories.

i am glad,
yes, i am
of your reposting.

I got a chance to ask Joel Salatin for his thoughts on Wendell Berry, I thought you all might enjoy the video: http://www.youtube.com/watch?v=wAxav-kuHps