Claudia Barry is thinking about retirement. She’s had a successful and rather lucrative career, but she’s thinking now about beaches and painting. She’s not married, has no family, and few friends. Her job requires considerable travel. 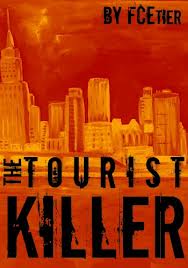 Claudia Barry is a hired assassin.

In F.C. Etier’s The Tourist Killer, Barry is planning what she hopes will be her last assignment – the killing of Brian Farrell, the head of the London-based ITTA Corporation and one generally unsavory character. (It helps plot credibility that Farrell is so ruthless – he needs something to happen to him.)

Complications arise. Barry is involved with retired FBI agent John Hixon, who’s hired by Julian Thibaut, a man Farrell is trying to have killed because he stands in the way of Farrell joining an elite council of corporate chieftains. Everything is building toward a meeting of that group in Atlanta. Both Thibaut and Farrell will be attending – and both may well be targets of assassins.

The Tourist Killer is fast-paced and one wild rollercoaster of a ride – shootings and ambushes on mountain roads alternate with flashbacks of events that have helped shape the main characters and what will happen in Atlanta.

The story centers on Barry. She is a kind of anti-heroine – likeable, sympathetic, and yet coldly calculating about her chosen profession. She’s an expert at disguises and plans each one meticulously. What makes her human – and keeps her from sliding into a killing machine – is her own understanding of how she has to function – carefully compartmentalizing who she is, what she does, and how she thinks. In that sense, she is very much the modernist, segmenting different parts of her life so that she can continue to do what she does.

Etier has written a fascinating suspense novel, using unlikely and potentially off-putting protagonists. Yet he manages to pull off what is ultimately a believable story.
Posted by Glynn at 5:00 AM

The Tourist Killer is available on Kindle, I might add.

Glynn, I was fortunate to read the first 100 pages of the book in rough draft. I knew then that it would be a great read. I bought the book a few days ago on my Kindle and hope to read it in the next few days. Thanks for the review.

This book has been in my TBR pile for about a month now. Your review has moved it to the top. Thanks.

A great review on a great book. I believe Etier has a chance to become a top author in the thriller genre, and I am delighted that you believe in him and his work as much as I do.

I, too, have read The Tourist Killer. Mr. Etier has a wonderful way with words and is well-versed in "assassin technology." I look forward to his next literary offerings. Nice review, BTW--Sara Marie Hogg, author

Very impressed with Etier's fast paced style of writing, his build up in suspense, his creativity and especially his imagination. And to someone like myself who has trouble figuring out how to load a sling shot, echoing Sara's earlier comment it was a nice bonus to now be so privy to all the minutiae of Guns and Ammo. Hard to believe all that pernicious knowledge lies within the soul of such a congenial and tranquil sounding Southern gentleman...can't wait for the sequel.