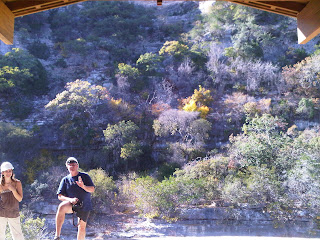 Being writers and editors, and seeing each other face-to-face only once a year, it’s no surprise that The High Calling editorial staff went crazy with photos, blog posts, Instagram pics, Facebook posts and tweets (the crazy guy was tweeting) (if you want to see all of the tweets, search Twitter for #THCretreat).

What follows below is by no means complete, but it is everything I’ve managed to come across this past week, including a few of my own posts. Collectively, it will give you a good sense of what happened during our meetings at Laity Lodge, with one exception.

On Friday night after the retreat devotion meeting with Robert Mulholland, Jeff Johnson, and the Westlake Presbyterian Church group from Austin, several of us were in the main lodge room. A few of the staff were in a really serious discussion about The High Calling, while Tim Miller (our photography editor and a native of Australia) and I were sitting at a small table working at our computers.

Suddenly I hear Tom say something that sounded like, “Hey, look, there’s a SKAWpion.”

I looked where he indicated – the concrete walkway outside the glass window we were sitting by. And sure enough, there was indeed a SKAWpion.

Except we Americans pronounce it “scorpion.”

The Quickest Way to Kill a Conversation, by Jim Wood.

Looking Down – Do You Know There is Light There? Photo by Kelly Sauer.

The Truth is Too Fragile, Photo by Marcus Goodyear.

There is so much love here – Photo by Kelly Sauer.

Dude, I just totally made this – Photo by Dan King.

I love these people – Photo by Jennifer Dukes-Lee.

On the Frio – Photo by Jennifer Dukes-Lee.

The High Calling Retreat – Photos by Tim Miller (on Facebook).

Decision No. 1 – Embrace My Identity by Kelly Sauer.

Honestly, Honestly, Slow Food is Worth the Planning by Marcus Goodyear.

An Element of the Sacred by Glynn Young.

The official High Calling “Hard Hat” photo – taken during the tour of the new Family Camp under construction at Laity Lodge.

Photograph: View from the Family Camp Worship Center, Laity Lodge. Kelly Sauer is at far left, with Tim Miller ("SKAWpion") next to her.
Posted by Glynn at 5:00 AM

Just a few of these I've missed. Love this place. Scorpions and all.

Oh, I pray you all will join (and start!) conversations in the new group on LinkedIn for Christian Poets, Writers, Editors, Artists, and Other communicators for Christ. I also pray each member will see This "High Calling" as mission and realize, yes, they're included! God bless you all.

I wrote a poem too, about trying to appreciate the sky on a dark, starry night: https://www.facebook.com/christine.a.scheller/posts/426025360789987

Didn't know it was Westlake Pres. That church is about two miles from my parents' house. They used to do a free lunch once a week for high schoolers.

Loved those folks from Westlake, Megan! Especially Flo. Thanks for these, Glynn. I missed some of them too.

Looking forward to reading the ones that I missed.

What fun! I enjoyed the virtual visit. Thank you.

As if I didn't have enough browser tabs open already... :) Checking them all out now. Thanks for this, Glynn.

Jennifer's "On the Frio" is really cool.

Glynn, this is one for the archives. I'm going to keep this FOREVER.

Really a fine collection. Who knew?