An Element of the Sacred 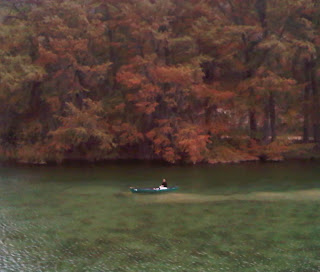 What strikes any visitor to Laity Lodge is first, the remoteness, and second, the beauty of the landscape.

How remote? Cell phones don’t work. How beautiful? The photograph above was taken while I was standing on the balcony of the main lodge building, early on Sunday morning. For three mornings straight, I got up at five, showered and dressed, walked to lodge and scrounged for coffee.

And then I inhaled the quiet, and the solitude. I’d write some. I’d watch the sun rise over the bluff – a magnificent thing to see.

I was there for the online staff retreat for The High Calling. We came from all over the United States and even from Australia. We arrived on Thursday in San Antonio, congregated in Kerrville (about an hour or so west of San Antonio), had dinner in Hunt, Texas, a few miles out of Kerrville, and then went on to Laity Lodge.

And it’s still reachable only by driving through a river for about four blocks. Like I said, it’s remote.

It’s also something else. The word, I believe, is sacred, but not because of anything spiritual that attaches to the landscape but rather what happens within that landscape.

And for us with The High Calling, meetings and discussions and planning. Those, too, had an element of the sacred about them.

For most of the weekend, we joined with a group from Westlake Presbyterian Church in Austin, Texas, there for their retreat. Together we heard a series of four messages from Robert Mulholland, a retired professor from Asbury Theological Seminary, and music from Jeff Johnson. And on behalf of The High Calling, I livetweeted Mulholland’s talks, except for the Eucharist service on Sunday.

I’ve already written a little bit about what I heard from Mulholland. There’s more, much more. His words prompted me to ask a question that I’m still answering: how many of my own career conflicts have been part of God conforming me to Christlikeness?

All of them, I suspect.

On Saturday afternoon, a group of us hiked the Circle Bluff Trail, which ends atop the bluff with a vista stretching for miles. I had hiked this trail two years ago. Once we reached the top, Marcus Goodyear, our tour guide and editor of The High Calling, asked who wanted to continue on. Two the group returned; four of us went on with Marcus. “Continuing on” included wading the Frio River, making our way to the Fencepost Trail, and then a descent into Box Canyon.

The descent included the use of ropes. But it was relatively short and not very strenuous.

If you were a mountain goat.

So we listened and talked, presented and pondered. We learned. We shared and encouraged. We sat quietly and we laughed. We walked and hiked and waded.

We spent some time at Laity Lodge. Good time.

The stone of canyon walls
rests in stacks, layers in color:
tan, gray, blue-gray; limed
with the waters, living waters
pouring in their trickles, flowing
down to the river,
down to the sea,
to launch a thousand ships. 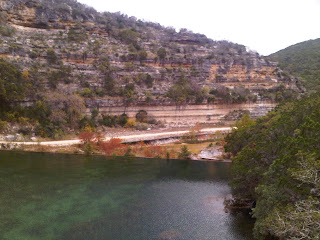 Sounds like a breathless place to go and spend time thinking about God. Thanks for letting us in on the weekend Glynn.

5? What an hour, Glynn. I enjoyed my mornings, too, just in a slightly different manner.

Thanks for sharing these memories from the canyon.

So glad you got some sacred R & R.

The November colors there are spectacular! I love that place. Sacred. yes.

Glynn, I've spent a lot of time in the Hill Country of Texas--my inlaws lived in Kerrville for 12 years. The Laity Lodge setting sounds perfectly magical. Thank you for taking us along on this blessed trip.

The water is such an unusual and incredible color.

It sounds like those of you who go there are blessed in many ways.

Glynn, God has given you eyes to see and ears to hear.

Reading this again today made me smile. Being with you all last week was as indescribable as it always it.

And I'm glad you enjoyed the hike!