For several years, ever since I happened upon his novels, I’ve been a fan of author Athol Dickson. He’s written some extraordinary stories, and I’ve enjoyed every one of them. He’s taken a slightly different turn with his new novel, toward a more classic murder mystery. But it’s the same tight writing and the same kind of compelling story. Athol had the opportunity to answer a few questions about his new book, writing, and himself.

Athol, tell us about your new murder mystery, JanuaryJustice.

The back cover pretty well tells the story: Reeling from his wife's unsolved murder, Malcolm Cutter is just going through the motions as a chauffeur and bodyguard for Hollywood's rich and famous. Then a pair of Guatemalan tough guys offer him a job. It's an open question whether they're patriotic revolutionaries or vicious terrorists. Either way, Cutter doesn't much care until he gets a bomb through his window, a gangland beating on the streets of L.A., and three bullets in the chest. Now there's another murder on Cutter's Mind. His own.

January Justice is the first in a new series will follows Malcolm Cutter as he works as a chauffeur/crime sleuth and looks for his wife’s murderer on the side.

When did you decide to become a writer? 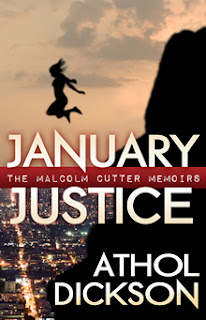 I didn’t really make a decision to become a writer, so much as it just happened. I was working as a partner in an architectural firm, and spending most of my days dealing with handling business issues instead of having fun designing buildings, which was not what I had in mind when I went into architecture. I wanted some kind of creative release, and I’ve always loved to read murder mysteries, so I decided to try my hand at writing one. A couple of years later, I met a newspaper editor who had good connections in the publishing world. He volunteered to read my novel, and to my surprise, he thought it was pretty good. He gave me my first professional editorial advice, and after I made the changes he suggested, he sent the manuscript to some friends of his. The next thing I knew, I had an offer from a publisher.

It was all sort of accidental, so I never really thought of writing as anything more than a hobby. But I enjoyed it, and I had a publisher, so I kept writing. Then one of my novels won an award and I flew to Denver to receive it. When they stood me up on stage and praised the book and gave me a round of applause, I remember thinking that somehow, I had become a writer. That was the first time it sank in.

Do you have specific habits when you write?

I write toward a specific goal every day. Sometimes it’s a certain number of words, and sometimes it’s the completion of a scene, but one way or the other I give myself that goal and I keep writing until I get there.

Are you an early bird or night owl?

I’m a morning person, usually up by five or five thirty, and working no later than seven.

If you could have coffee with any character of any book, who would it be and why?

Sherlock Holmes would be near the top of the list. I’d like to try to stump him. Also, I think it would be fun to have tea, not coffee, with Miss Marple. I’d love to hear her call me “dear.” And Sam Spade, for the witty banter.

What do you do, besides writing? 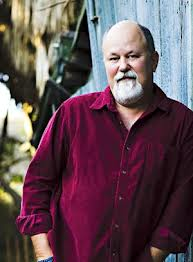 Boats and boating are a passion, and have been since I was very young. One of the earliest photos of me was taken while I was “steering” a boat on a lake. (Actually, I think it was my uncle doing the driving while I sat on his lap, but I didn’t seem to realize that at the time.) A few years later, I built a boat from Styrofoam packing material one time and floated down a creek and into an underground drainage culvert, which didn’t open up again for about three city blocks. That was a big adventure. And just a few years ago my wife and I sold our house and cars and moved aboard a boat and cruised on it for a year, along the Gulf of Mexico’s northern coast, and up and down the eastern seaboard of the United States.

Is there something you want the readers to know about you?

I’m humble but lovable, and if you don’t believe it, just ask me.

Best reward as a writer?

When I finish a scene, and I know it’s good, that’s a fantastic feeling.

How do you react to a bad review?

Over the years I’ve had very few really bad reviews, and the few I’ve had, I ignore. There have been maybe three or four from individual readers on Amazon, and none from professional reviewers in print. So I figure the best thing is to go on pleasing the majority instead of worrying about the opinion of a small minority.

Do you have a good relationship with your fans?

Of course! How could I not love a fan?

My review of January Justice.
Posted by Glynn at 5:00 AM

Would love to be the "fly on the wall' listening to a chat between Dickson and Sherlock Holmes! Or Sam Spade. I enjoy Dickson's perspective on the writing life and especially reviews.

Okay. You (and he, in this conversation ) have sold me on him as a writer. Where would you suggest I begin? With this mystery series? Or one of his in-between mysteries titles? I could use a good, fast read about now.

Thanks for the post, Glynn. And while I'm at it, thanks for all the great reviews on your blog and at Amazon!

Diana, since you want to check out on of my novels you're in luck, because from today through Tuesday the 12th, you can download one of my other mysteries for free at Amazon. Go there and search for WINTER HAVEN in the Kindle section. It's a bit more "Gothic" than JANUARY JUSTICE, which is a straightforward murder mystery as Glynn said, but WINTER HAVEN is still very much a mystery story. Some of the critics compared it to REBECCA by Daphne du Maurier. I hope you like it!

Thank you, sir! I'm out in the ether downloading it as I write. Looking forward to reading it.