I knew it had always been true

I know the date, time, and place almost exactly. 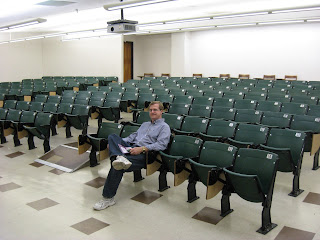 I didn’t do the proverbial “ask Jesus into my heart as my personal savior.” It didn’t go quite that way. It was a silent prayer, but it went more like this: “I’m running into something here that I don’t understand, a standard that I can’t measure up to or even hope to measure up to. In comparison, everything I’ve known and wanted and desired is trash. I don’t know why you want me, but since you do, you’ve got me.”

I can’t explain this, but very quickly everything became brand new. I was not “madly in love with Jesus.” I had no mountain-top emotional experiences. But it was all brand new, and I was now seeing things with new eyes.

No one talked about worship wars, culture wars, politics, or the new building program. The church I started attending wasn’t a conventional church at all – it was a group of people who met on Sundays in a lecture hall in LSU’s law school.

I was introduced to a small Bible study group that met in a house off-campus on Saturday mornings. At my first meeting with them, the discussion was about the design of the tabernacle for the Hebrews during the 40 years in the wilderness.

I even went on what today would be called a short-term mission trip – a beach outreach during spring break at Destin, Florida. I remember having an hour-long conversation with a tourist from Germany.

I didn’t know it at the time, but those very early days of my new-found belief would shape my faith for the next 40 years – the way I thought about faith, the way I tried to live it, the way I understood it. It was never about institutions, denominations, or buildings. I encountered all of those things and more along the way, but I never confused them with the church or my faith.

Perhaps most significantly, I have never had doubts about Jesus, God, or my faith. I’ve had plenty of times, serious times, of asking “Why,” and not understanding, and getting angry. But I’ve never had a “crisis of faith,” although I know people who have. I’ve never gotten caught up in the evolution-versus-creationism debate.

In a very real sense, I have had the gift of faith. (If there is any of me in the main character of Michael Kent in my two novels, it is precisely this gift of faith.) 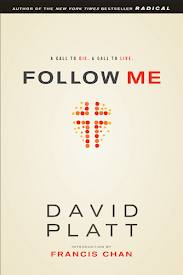 Last week, we followed David Platt as he jackhammered some of the concrete of American cultural Christianity. We’ve had some time to clear away the rubble and let the dust settle.

To the extent that it’s possible, in Follow Me: A Call to Die. A Call to Live, Platt has blasted away the “American cultural” part and is reaching to define what’s left – the “Christianity” part. He’s stripping away what we Americans understand about Jesus, and taking us to what looks like a very different place – the place where Jesus is.

What this is about, Platt says, is taking Jesus at his word. It’s not picking or choosing what we’re most comfortable with, but taking him at his word – his whole word.

And when we do that, we become part of a grand story. “So we go as disciples of Jesus who love his Word and trust his truth,” Platt says. “We got not simply as men and women who at some point decided to make Jesus our personal Lord and Savior, but ultimately as men and women who at every point are devoted to proclaiming Jesus as the universal Lord and Savior. We believe him as his disciples; therefore, we obey him and make disciples.”

That small group Bible study I joined right after finding faith? And that first study about the diagram of the tabernacle in the wilderness? What I remember most about it was the study leader showing how the lines intersected.

The lines took the form of a cross.

As soon as I saw it, I knew it was true. I knew it had always been true.

We’re discussing Follow Me over at The High Calling. Laura Boggess is leading the discussion, and various writers are posting each week. Today’s post is by Sheila LaGrand, and she’s covering chapters 4 and 5..

Here Come the Radicals. Christianity Today has something of a different take on David Platt, Francis Chan and other leading “radical” Christians.

Last week’s discussion on the book at The High Calling.

Top photograph: the classroom in Lockett Hall, LSU, right outside of which I accepted my new faith in 1973.
Posted by Glynn at 5:00 AM

What a gift, indeed, Glynn! I loved reading this piece of your story.

Or rather, I loved reading this piece about your place in His story.

I love your prayer, Glynn- honest and raw- the kind I believe God respects. And your experience is similar to mine in that it wasn't an institution that gave you conviction, but merely by opening the Word and allowing it to come alive. Therefore I'm more passionate about defending God's Word than I am of defending any particular church.

That first to faith is one that stays etched in our hearts and though at times covered and hidden reveals itself over and over again to remind us of truth...bkm

I need to make sure that my life-lines keep taking the form of a cross. Indeed, I do.

What a wonderful testimony, Glynn. In many ways, you were blessed to have come into a saving faith in Christ in this way. It reminds me of the weight of our words always, but especially when we are discipling new believers. I included one of the same quotes in my discussion here: http://pollywogcreek.blogspot.com/2013/03/we-believe-him.html {There was too much in these two chapters for me to discuss in one post, so today's only covers chapter 4.}

What an amazing testimony, Glynn! Thank you for sharing you remarkable gift of faith with us.
Blessings always!

Cool photo, Glynn! That is a great story. Mine was more of an ongoing spiritual development through a church-going home, youth groups, and a very strong college fellowship group - each giving me a successive strength of faith.

However, unlike you, I do struggle with doubt at times. Not atheistic doubt, but broader questions of faith and history and culture. This book sounds, interesting, challenging. And I worry that it would bother me as well. Which is a good reason for me to read it, don't you think?

I appreciate what you have shared here. I also was raised in a Missouri Synod church but have since "broadened my horizons" in countless ways. I often wonder though what the scriptural frame for "the sinner's prayer" is. Sometimes it seems we concentrate more on method than on heartfelt repentance. Going back to the words of an old hymn ... "simply to the cross I cling."

I felt jack-hammered during those first chapters. More "comfortable" this week. I've sensed God's pursuit since I was a child--even though my family was basically unchurched. I prayed a prayer next to the brick wall of my elementary school with my friend. I don't remember if I felt anything different then, and I've had moments of doubt, but overall, I've fallen deeper and deeper in love.