One of my favorite books, if not my most favorite book, is Don Quixote by Miguel de Cervantes. I first read it in high school – the entire unabridged edition that was one big fat paperback. 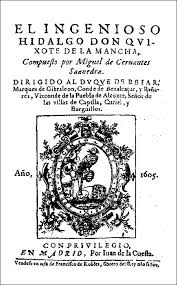 I loved the story. I loved the crazy elderly Spanish landowner galloping around the countryside, tilting at windmills, and recognizing only the nobility in common, everyday things. It was so wildly improbable – the prostitute Aldonza could really be the beautiful Dulcinea? And a barber’s bowl was the golden helmet of Mambrino?

I loved the 1972 movie with Peter O’Toole and Sophia Loren, too. I saw it while I was in college.

Some 20 years later, I read it again, during a week we spent in Gulf Shores, Alabama. Each morning, I’d carry the book down to the hotel beach, get my umbrella and chair from the attendant, and settle in to ride with Don Quixote across the landscape of early 1600s Spain.

It has lost none of its magic, but this time I could see the story was ultimately about redemption, and how people were reborn as the people they were meant to be when this crazy old gentleman on a broken down horse touched their lives.

It’s worth noting that Don Quixote was written during the Spanish inquisition, when many innocent people were arrested, tortured and killed.

In The Furious Longing of God, Brennan Manning recounts the story of Don Quixote and Aldonza. He draws a parallel between her redemption with the redemption of us by God, through the “healing of affirmation” by the crazy old man. Aldonza the prostitute indeed becomes the beautiful Dulcinea, her ugliness and sin washed away. Don Quixote saw her as the woman she was meant to be, and she believed. 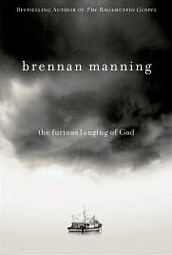 A story can be powerful, even a much simpler (and less literary) story than Don Quixote. I was told that a woman who had been witnessed to for years by her husband, brother-in-law, and mother-in-law, had read my novel Dancing Priest and said to her husband, “I finally understand what you mean when you talk about faith.”

I’ve been touched by a healing hand of affirmation more times than I can remember – a pastor and his wife, cash sent anonymously through the mail to meet a need, a pastor who sat with us and prayed while my oldest son had brain surgery, by my pastor and a few elders who prayed over me and ruptured disc. Over and over again people have reached out and touched me with a hand of healing.

“According to that mysterious substitution of Christ for the Christian,” Manning writes, “what we do to one another we do to Jesus.”

Led by Jason Stasyszen and Sarah Salter, we’ve been reading The Furious Longing of God. To read more posts on this chapter, “Healing,” please visit Sarah at LivingBetween the Lines.
Posted by Glynn at 5:00 AM

Glynn,
I love this post! I'm reading Don Quixote right now--I'm a third of the way through it. Your take on it is a terrific framework for me to consider.

(The Brendan Manning book sounds fabulous, too, of course. . .)

I read Don Quixote in college and never read it again. I don't think I appreciated it then -- as it was taught with a political slant -- but I love the connection you made with it now.

BTW: DQ -- is a great read to have in your repertoire as it has references and allusions to it in all kinds of places. :-)

I'm embarassed to admit, I've never read Don Quixote. I know the story, but not the specific details. Your post plus Manning's chapter (not to mention the Veggie Tales take on the story) is inspiring me to pick it up.

Offering a helping or healing hand to someone in need not only blesses the receiver, it also blesses the giver. Our problems seem somewhat diminished as we reach out to others.

I've never read the entire book of Don Quixote, but after hearing Mr. Manning and you talk about it, I want to. That statement you quoted: what we do to one another we do to Jesus--that's beautiful and frightening. I want to live a life greatly tilted toward that beautiful side as He moves me by His grace. I have received so much affirmation and blessing from Him in so many ways. Thank you, Glynn.

Cool story about the woman and Dancing Priest. I just that same book along to my mom who is a reader.

I've never read Don Quixote, but as a Spanish major, I saw the movie several times and loved it every time.

I saw El Cid about as many times. Maybe my teachers had a thing for Sophia Loren?

Now I have to go re-read Don Quixote!

I've recommended your books to several people and have yet to have one person not be moved by them.

we walk here
as His hands and feet
His voice with volume....