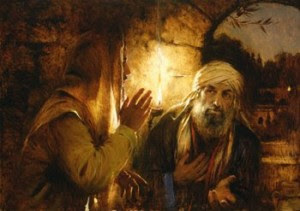 I cannot explain why I was first attracted to what he said, to him. I was walking to the Sanhedrin, when I saw the crowd and stopped to listen, there at the edges. I heard his voice before I saw him, and it was the voice of authority.

I remained longer than I planned, listening to him that day. I moved closer. No one could touch his voice of authority, even though they tried, over and over. I wondered if he had been trained in the law courts. He quietly demolished each leading, provocative question. Call it destruction by love.

They weren’t happy, though. Or convinced. They sniffed something of the heretic about him.

But what I heard rumbled through my bones, trying to find a way inward.

I sent word, quietly, to one of his disciples. Might we meet, beyond the prying eyes of the priests, the Sanhedrin, the Pharisees, the Romans?

We both understood that I was not prepared to meet with him openly. The risks were too great for a man in my position.

He was waiting, quietly, when I arrived. This close, I could see how the crowds diffused his presence, which was completely focused for this crowd of one. 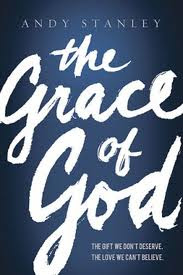 I was unnerved. His presence, his words, his toughness mingled with gentleness: all were unnerving. I was stripped bare, defenseless.

I left shaken, my soul rent. I turned to prayer, my servants giving excuses to all, murmuring about an illness. And it was true, that illness. My self was dying.

I stayed aware of his activities. I knew this would end badly; the Sanhedrin was plotting and would not be denied. I envied his disciples, but my physical separation from him did not stop my interest, or my response. I was continuing to die, terrified that I could not stop it and terrified that I might.

That day on the hill, that terrible day, I stood with the jeering crowd. I finally understood what ne meant about being reborn. My self had died; my self was alive. To die as he did was to die to my sin, the sin no performance of the law could ever cover.

He died on that hill. He was not reborn on it; I was.

Joseph, my friend, asked me to help. We went to Pilate to ask for his body, to bury it properly, not the garbage him where it was destined with other dead criminals.

Pilate smiled in mild surprise at our request, we two wealthy members of the Sanhedrin asking for the body. We no longer cared who knew; the priests objected but Pilate’s approval cowed them. My friend Joseph and I had unexpectedly moved through the eye of the needle.

We prepared his bruised and battered body. Even in death, his face told me this was not over.

We must have been a spectacle, we two rulers, doing this work of burial. When we finished, his body wrapped in the shroud, the guards rolled the stone in place.

As we walked away, I looked back. We were in a kind of garden, like the one where I first met him. I knew this was only beginning. He had healed my soul too deeply that night, in that other garden, for it all to end here.

Joseph and I will slip into the darkness of history, to be known only for the questions we asked and the rite we performed. He, however, will remain the light.

This post was inspired by Reborn by Grace,” chapter 10 of The Grace of God by Andy Stanley. Led by Jason Stasyszen and Sarah Salter, we’ve been discussing the book. To see more posts on this chapter, please visit Jason at Connecting to Impact.
Posted by Glynn at 5:00 AM

This is inspired writing, indeed, my friend! Just amazing! Thank you for adding such beauty to this day, Glynn.
Blessings!

Loved this, Glynn. My favorite line: "He died on that hill. He was not reborn on it; I was." God moves so differently than we do, but it's such a beautiful thing (even when it looks horrifically dark). The light keeps shining! Thanks Glynn.

This was especially meaningful.