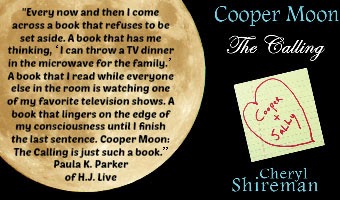 Cooper Moon drinks too much, has trouble holding down a job, and is irresistible to virtually any women in the small town in Michigan he lives in. His long-suffering wife Sally has no illusions about her errant, wandering husband, but she also finds him irresistible, especially when she looks into his eyes. They live in a trailer (mobile home being too fancy a word). Sally works at a local diner. Cooper works wherever he can find employment.


And then Cooper has an epiphany. He discovers he believes in God, and that God is telling him to build a church. He has no idea where to build it or how to pay for it, but he knows that he’s supposed to build a church.


Cooper Moon: The Calling by Cheryl Shireman is Cooper Moon’s story. And it’s a surprise. It’s the kind of novel you might expect to find set in the Deep South, like Fried Green Tomatoes at the Whistlestop Café by Fannie Flagg or Crazy in Alabama by Mark Childress. Instead, it’s set in Michigan. Who knew people in Michigan could be as crazy as people in the Deep South? (I can ask that question; I was born and raised in the Deep South.)


Shireman keeps us guessing throughout the entire story. Will Cooper build his church? Will he finish it before an irate husband burns it down? And what about the irate wives, none of whom are pleased with Cooper’s new direction? Or the pastor of the big church in town who doesn’t like the idea of competition?


Carefully and almost joyfully the author weaves these stories together with several others, including the town’s police officer whose wife desperately wants a baby and instead has to deal with her mother-in-law slipping into dementia, and his brother who’s in serious training for a reality TV show, and Sally Moon herself becoming entrepreneurial, and characters (female) trying to dissuade Cooper – some rather strenuously – from his new calling.


This is one rollicking novel, and you’re never quite sure what’s going to happen next. But there is a sequel – Cooper Moon: The Temptation – and Shireman is working on a third novel in the series.


When I started reading it, I wasn’t quite sure where this story was going to go. But I held on. And I’m glad I did. (And it's currently free on Amazon Kindle.)


The Deep South arrives in Michigan!
Posted by Glynn at 5:00 AM

Oh, this sounds like a fantastic read! Thanks for the recommendation, Glynn. :)