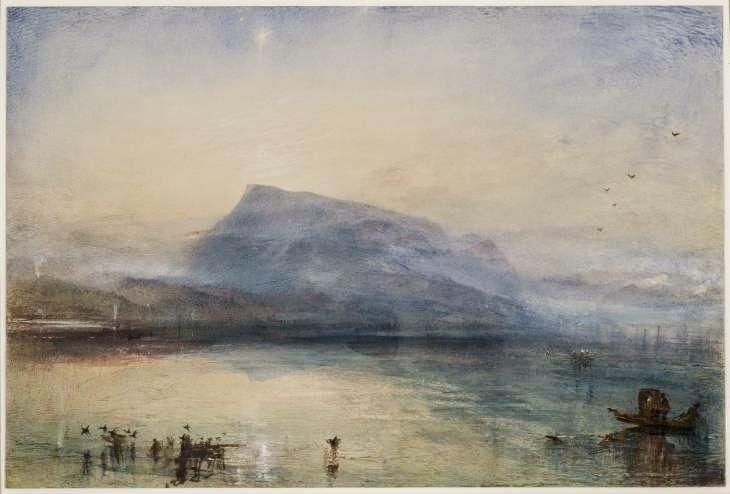 When we visited London in 2012, one of our “sights” was the Tate Britain, and one of our “sights” at the Tate Britain was the collection of paintings by J.M.W. Turner (1775 to 1851), the British artist who changed landscape painting forever. You see his paintings and you think Impressionism, you think contemporary art. You don’t think the first half of the 19th century. 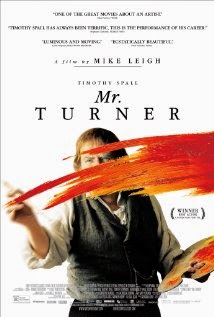 Last fall, when we returned to London, we saw a special exhibition at the Tate Britain – Late Turner: Painting Set Free, which focused on his work from the latter part of his life. It’s a wonderful exhibition, and it’s still on through Jan. 25. Of all the paintings in the show, the one that appealed to me most was the watercolor pictured above – The Blue Rigi, Sunrise.

Last night we went to see Mr. Turner, the movie by Mike Leigh (he also wrote the screenplay). The movie, starring Timothy Spall in the title role, is almost “ekphrastic” – a film (or work of art) about another work of art. In many respects, watching the movie is like watching Turner’s paintings. From what I’ve read of Turner’s life and art, Spall captures the man almost exactly. Turner was not without controversy, some of it well deserved, and Spall plays the artist very well indeed. If you’re interested in Turner, his art, or early Victorian Britain, it’s a movie to see.

If you’re interested in reading about Turner, four books I’d recommend are:

Turner by Peter Ackroyd (2006) (Ackroyd has written about virtually everything else in British history, and he does well with Turner and his art.)

J.M.W.Turner: Painting Set Free (2014) – the book that accompanies the exhibition at the Tate Britain.

Looks like a film I'd enjoy very much. Thanks, Glynn!

We love Turner, Glynn, and our very first stop in London was at the Tate Museum. He was an extraordinary painter. I'd not known of this movie (I don't keep up with them), so I appreciate this recommendation, and also your continual emphasis on art. God can use all the arts in such life-giving ways in our lives.
Blessings,
Lynn

My friends and I are Victorians to our roots. After watching the glorious Mr. Turner, we sat, mouths hanging open in awe. We felt as if we had been transported back to our era. The director recreated the time period so faithfully and the cinematography was the best I've seen.Breathtaking.