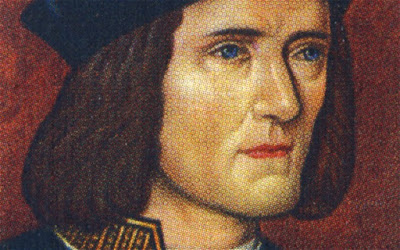 I was in high school when I first read Josephine Tey’s The Daughter of Time, originally published in 1951. Tey’s detective, Inspector Alan Grant, is laid up in the hospital, and avoids boredom by reexamining what is likely the most serious charge ever laid against a British sovereign – the murder of the young princes in the Tower of London by Richard III, the last of the Plantagent kings. Tey’s mystery is fascinating and rather pointedly suggested that history could well be?

But then, what academic would take a mystery novel seriously? 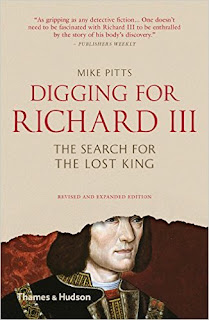 Four years later, an American historian named Paul Murray Kendall did academically what Tey had done novelistically. He wrote a biography of Richard III that relied exclusively on contemporary sources instead of the later accounts like that of Sir Thomas More (Shakespeare used More’s account for the basis of his play Richard III.) What Kendall discovered was that there was a world of difference between what Richard’s contemporaries said and what later (and rather obviously biased Tudor) accounts said.

In 1998, film writer Philippa Langley stopped briefly at a Waterstone’s bookstore in Edinburgh, to find something to read while on holiday. She saw an old book, thought it looked interesting, and bought it. She later said she spent less than minute picking it out. The book was Kendall’s biography of Richard III.

Her selection changed history, figuratively and literally. After reading the book, she became convinced that Richard’s reputation has been deliberately blackened by writers seeking to flatter the Tudors, not to mention the Tudors themselves. Richard had been turned into a monster, while contemporaries had a very different perspective.

Langley would play a critical role over the next 14 years in what became one of the marvels of modern archaeology – the discovery of “Skeleton X’ during a dig in Leicester in central England, the skeleton confirmed as that of Richard III. In fact, she played a critical role in the questioning, badgering, motivating , fundraising and undertaking the dig at the site of Greyfriars Friary.

Or at least it was thought to be the site; no one was quite sure. The friary, which contained Richard’s tomb, had been destroyed during the dissolution of the abbeys, monasteries and convents by Henry VIII after the English Reformation (Henry was less interested in theology and church matters and more interested in the divorce the Pope wouldn’t grant and the wealth that the various Catholic institutions held in England). The story was that at the time of the friary’s destruction, an angry move had destroyed the tomb, exhumed Richard’s remains, and tossed them in the nearby Soar River.

The story of the discovery and confirmation of Richard III’s skeleton is wonderfully told in Digging for Richard III: the Search for the Lost King by Mike Pitts, first published in 2013 and updated and expanded earlier this year to cover the reburial earlier this year. Pitts was well-suited to write the story – he’s the editor of British Archaeology Magazine and the author of several archaeological works, including Hengeworld, the account of the discovery of a large prehistoric temple in Somerset.

Digging for Richard III is a full and fascinating account of how the king’s remains were discovered – the role of Philippa Langley, the assembling of the team at the University of Leicester, how Richard III societies around the world contributed to the funding of the project, and how the goals of the archaeological team often conflicted with those of Langley and her supporters. The team was trying to identify the site of the friary, with the finding of Richard III’s remains somewhere down the list of objectives. In fact, the archaeological team didn’t really think finding Richard’s remains was all that likely.

This was a project that did not go as archaeology projects usually go. As Pitts quotes the members, typically a team will find a few pottery shards “you can’t even sell on eBay.” In the case  of the dig at Leicester, what was labeled “Skeleton X” was found the very first day of the dig. But it was simply a skeleton, until a forensic specialist began to dig the skeleton out of the compacted dirt and discovered it had scoliosis, or a severe curvature of the spine. Just like the reports of Richard III. Four months later, DNA testing with descendants of the king confirmed it was indeed Richard III.

The findings sparked an international sensation, and, no surprise here, the inevitable lawsuits. All kinds of organizations and cities wanted Richard’s remains (think tourist dollars). There were online votes and lobbying, with Queen Elizabeth II giving a dignified nod to the cathedral at Leicester, a few short miles from where Richard was born and the nearby field where Richard died in the Battle of Bosworth in 1485. This past spring, Richard was reburied in the cathedral.

Not all archaeological projects happen as thrillingly as this one, but Pitts tells a great story. It’s all about Richard III, yes, but it is also how forensic science, DNA testing, and good old intuition played critical roles in finding the body of a long-lost king.

At the reburial service, actor Benedict Cumberbatch read a poem written for the occasion by Carol Ann Duffy, Britain’s Poet Laureate (you can watch the reading here). This is the poem:

Richard
My bones, scripted in light, upon cold soil,
a human braille. My skull, scarred by a crown,
emptied of history. Describe my soul
as incense, votive, vanishing; your own
the same. Grant me the carving of my name.

These relics, bless. Imagine you re-tie
a broken string and on it thread a cross,
the symbol severed from me when I died.
The end of time – an unknown, unfelt loss –
unless the Resurrection of the Dead …

or I once dreamed of this, your future breath
in prayer for me, lost long, forever found;
or sensed you from the backstage of my death,
as kings glimpse shadows on a battleground.

Related: Highlights of the reburial service earlier this year.

That sounds fascinating. The story of the finding of Richard III's body was in the news, here in England. This might solve my problems with finding a Christmas present for my husband!