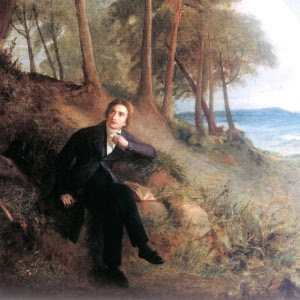 He was 25 when he died. In his lifetime, he published all of 54 poems, and wrote a total of 150. He was seen by many as something of a radical, abandoning the poetry written by John Dryden and Alexander Pope and instead loosening poetic forms, and thus inviting massive cultural and societal change (they took poetry rather seriously in the early 1800s). Upon his death, he slipped into a shallow obscurity, and it would take Alfred, Lord Tennyson to resurrect his poetry and his reputation.

We usually meet Keats and his fellow Romantic poets in high school English classes, and we wonder why anyone would write a poem about a Greek pot. Or a nightingale. Love poems we understand, but this other stuff seems a little strange. It often takes a gifted teacher to help us understand what poems like “Ode to a Nightingale” and “Ode on a Grecian Urn” are really about. 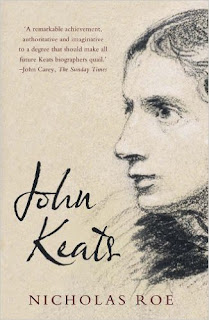 In September, my wife and I had the opportunity to join a “Keats Walk” in Hampstead and Hampstead Heath in north London, led by the able guide Anita Miller. Hampstead is the area most associated with Keats, the area where he lived for a time, and many of his greatest poems were written there. (Starting tomorrow, I have a series of four articles at Tweetspeak Poetry in November that explore the walk, the poetry, and the impact and influence of Keats). The walk ended at Keats House, almo known as Wentworth House, and it was there I bought the 2012 biography of Keats by Nicholas Roe, simply entitled John Keats.

A number of good biographies of Keats have been published, including ones by W. Jackson Bate, former British poet laureate Sir Andrew Motion, Sidney Colvin (an older biography free on Amazon Kindle under public domain), and the pre-Raphaelite writer William Rossetti (also free on Amazon Kindle). Nicholas Roe’s biography likely exceeds them all – meticulously researched, exploring both Keats’ life and his poetry, documenting what is and isn’t known about the poet, his family, and his poetry.

Roe, professor of English Literature at St. Andrews University in Scotland, brings a wealth of both professional, academic and perhaps even personal understanding to his subject. He’s the author of Wordsworth and Coleridge: The Radical Years (1990); John Keats and the Culture of Dissent (1999); The Politics of Nature: William Wordsworth and Some Contemporaries (2002); Leigh Hunt: Life, Poetics, Politics (2003); Fiery Heart: The First Life of Leigh Hunt (2005); and Romanticism: An Oxford Guide (2005). He’s also served as editor of Samuel Taylor Coleridge and the Sciences of Life (2002); Keats and History (2007); and English Romantic Writers and the West Country (2010).

If his publications weren’t enough, Roe is also chair of The Keats Foundation, Keats House, Hampstead,  and a trustee of The Wordsworth Trust, The Keats-Shelley Memorial Association, and The Wordsworth Conference Foundation. He’s one of the leading Romantic era scholars.

His biography of Keats is that of an academic, yes, but an academic who has broadened his writing style to embrace a more general interested reader. And the picture of Keats he presents is more of a complete one, that of a rising poet conscious of what it takes to succeed in poetry, dealing with family tragedies and illness for almost all of his young life, and a poet who could quickly dash off a beautiful poem while more experienced, practiced poets would agonize. Keats was also the poet somewhat sneered at by critics; he did not arise from the gentlemanly, educated classes but from a more middle-class commercial one (Keats, Roe points out, was often cited by contemporary critics as a “Cockney poet”).

Well-researched and extensively footnoted, Roe’s John Keats provides tremendous insight into the poet who almost fell into obscurity but whose poetry would influence Tennyson, the pre-Raphaelites, Pound, Yeats, Eliot, Derek Waldcott and Seamus Heaney, and the poet who wrote some of the most beautiful poems in the English language. It’s an excellent biography.

To see the start of the series on Keats in Hampstead and the Keats Walk, please visit Tweetspeak Poetry tomorrow.

Painting: John Keats on Hampstead Heath by Joseph Severn.
Posted by Glynn at 5:00 AM