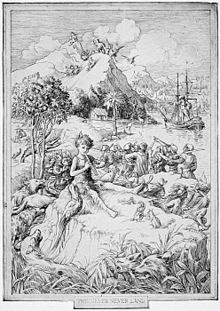 My entire understanding of Peter Pan came from the 1952 movie by Walt Disney. I have vague memories of the television version starring Mary Martin in the title role (same as the Broadway production), but it was Disney who introduced me to the boy who refused to grow up and all his cohorts – Captain Hook, Mr. Smee and the rest of the pirates, Tiger Lily and her Indian tribe, the Lost boys, the crocodile, and the Darling children – Wendy, John and Michael (and don’t forget Nana, the nursemaid dog).

I’ve now gone back to the original children’s story, Peter Pan by J.M. Barrie, and I have to say I’m completely charmed by a children’s story that’s more than 100 years old. And kudos to Mr. Disney for following the original story so closely in the animated movie version.

J.M. Barrie was a popular novelist and playwright, originally from Scotland and living in London. In 1902, he wrote an adult novel called The Little White Bird that for several chapters had a character named Peter Pan – a baby who flew into Kensington Gardens in London (which  is why the gardens today has a statue of Peter Pan). Two years later, he wrote the play Peter Pan, and it was a box-office hit. His publisher took the Peter Pan chapters from The Little White Bird and published them as a separate work. In 1911, Barrie wrote the novelized form of the play, calling it Peter and Wendy. This is the story we know today as Peter Pan.

The plot is familiar: Peter gets separated from his shadow at the Darling home in London, and comes back. Wendy sews it back on – and she and her two brothers fly off to Neverland with Peter (and Tinkerbell). In the book, they are gone for a considerable period of time, and Mr. and Mrs. Darling are heartbroken. After various adventures with Indians and pirates (and Peter’s duel with Captain Hook), Wendy and her brothers return home.

The story is about being a child and an adult, and the wonder we let go of when we become that adult. And it’s a thrilling adventure, too, and I suspect written to be read aloud – Barrie includes a number of asides about the plot and character that might go over the head of small child but which an adult reading the story aloud would chuckle over. But the Indians and pirates and flying and living underground and that crocodile that swallowed the clock chasing Captain Hook – that’s the stuff for children’s ears, and children’s imaginations.

Disney still releases Peter Pan now and then, and you can buy the DVD, of course, and the legend continues. In 2004, Johnny Depp and Kate Winslett starred in a movie about J.M. Barrie and the creation of Peter Pan called Finding Neverland. And it was quite a good movie, nominated for a number of Academy Awards including best picture.

The edition of Peter Pan that I read was published by Collector’s Library in 2014, and it included the original illustrations from the 1911 novel done by F.D. Bedford.

Peter Pan is a delight to read, and I am plotting to read it aloud to my two oldest grandsons in the not-too-distant future.

Related: The trailer from Finding Neverland.


Top illustration by F.D. Bedford from "Peter and Wendy" by James Matthew Barrie, published 1911. Public domain.
Posted by Glynn at 5:00 AM

Believe it or not, this is one I've not read. Adding it to my list! Thanks, Glynn!