“One: Unity in a Divided World” by Deidra Riggs 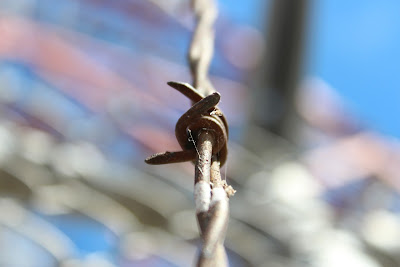 I am Facebook friends with a considerable number of Christian writers and poets. Many of these friends I have met face to face, talked with, had deep conversations about serious issues with, worshipped with, and prayed with, together and in a larger group. Over time, as relationships grow and develop, you believe you know people, or know them better.

Then came the presidential election of 2016. I discovered that, for many of these friends, I didn’t really know them at all. Ferocious anger, rage, hatred, outbursts, disdain, and even sarcastic snark poured out all over my Facebook newsfeed. One friend, a minister, said on Facebook that you couldn’t be a Christian and have voted for Donald Trump. 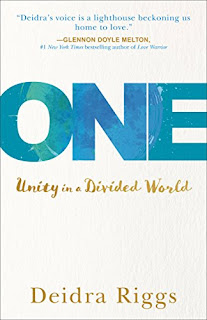 It turns out I didn’t really know my Facebook friends after all. It was disheartening and discouraging.

It is this response to the election that kept recurring as I read One: Unity in a Divided World by Deidra Riggs. Riggs also feels and grieves the division and divisiveness in the church, but she’s experiencing it from a different vantage point. But she always has good, important things to say, and I knew I would learn from reading her new book. And I did.

In One, Riggs is talking to and with the church. Using both Scripture and personal anecdotes, she addresses the deep divisions, the lashing out at each other, the intense political arguments – all that stuff on my Facebook newsfeed. What she says is that we are supposed to be known by our love – not by wearing “Make American Great Again” baseball caps or how many “#Resist Trump” groups we join. Sadly, that is not what’s been happening.

“Our identity is who God sees when he looks at us,” she writes, “and God is not a politician.”

What are the things that divide us? Attitude. Perception. Race. Income. How we understand evil and injustice. Fear. Politics (always politics). Culture. History. We put God into boxes of our own making, without realizing that God is always bigger than those boxes. Far bigger.

Of all the divisions that exist between Christians, race is likely the most stubbornly resistant, and by a wide margin. We still worship largely as white churches and black churches, Riggs says, and the situation hasn’t changed much in the last 50 years. There’s a lot of history to be overcome. That division is a loss to all of us. We are all made in God’s image, she points out, and God doesn’t make mistakes.

Riggs devotes a chapter to discussing the death of Michael Brown in Ferguson, a black teenager shot by a white policeman. Two competing narratives emerged out of that death, one considering Michael Brown as victim and one considering Brown as thug. Riggs went to Ferguson in the days after the shooting, and was profoundly affected by what she found there.

I expected to be challenged and jarred when I read One. And I was. She quotes groups like the Southern Poverty Law Center that raise my hackles. But perhaps that is the point – perhaps some issues require groups to be out on the edge to gain attention and for the issue to be taken seriously. Sometimes you need people in your face to understand that there really is a problem here.

Riggs is a writer and speaker. She's previously published  Every Little Thing: Making a World of Difference Right Where You Are. She's spoken at Tedx conferences and women's retreats, and is the founder and host of the One Conference. She and her family live in Lincoln, Nebraska.

One is well worth reading and digesting. It provides insights into some of the thorniest problems faced by the American church. It points to possible solutions. You don’t have to agree with everything it says, and you probably won't. But you will see the value it offers. Deidra Riggs and I might disagree in a number of areas, but we have the important ones – and the important one – in common. And she is well worth listening to.

My review of Every Little Thing.

The web page for One: Unity in a Divided World.

Top photograph by James Maxon via Public Domain Pictures. Used with permission.
Posted by Glynn at 5:00 AM

I was very active in a small racially diverse church for nine years, and it was the best church experience I ever had. Even though the church itself dispersed and no longer meets on Sundays in a building, the former members stay in touch and meet at reunions every few years. We still are there for each other. I don't recall that we ever talked about politics during those years. We know we are one in Christ no matter the skin color or culture.

Political conflicts are still dividing Christians on Facebook -- even those who are actual real-life friends. It breaks my heart. A divided church that uses carnal weapons to fight spiritual enemies and sees the devil instead of Christ in each other's faces is in no position to fight the spiritual battles before us. I'm interested in this book.

I discovered the link to this post in the Authentic Blogging group on Facebook, and I'm glad to have found you.